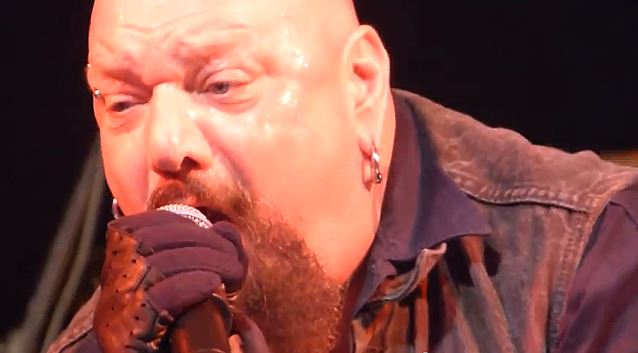 PAUL DI'ANNO: 'I Do Not Sing Opera And I'm Not A Ballerina'

After someone in the crowd called out the name of MAIDEN's current frontman less than 15 minutes into Paul's set at the Block 33 venue, Di'Anno responded (see video below): "You think that's funny? You cock-sucking motherfucker. There's always one gay guy, always one f****t. Man, I'm not even gonna come off stage and beat the piss out of you. I'll get my security boys to take you out. Yeah. So shut your fucking mouth."

He continued: "So, Bruce Dickinson… Listen, I do not sing opera and I'm not a ballerina. I just play fucking straight-ahead punk heavy metal. If you wanna listen to Brucy baby, fuck off home. Otherwise, I'll play for my fucking friends tonight. So if you don't mind it, suck my dick, you cocksucker."