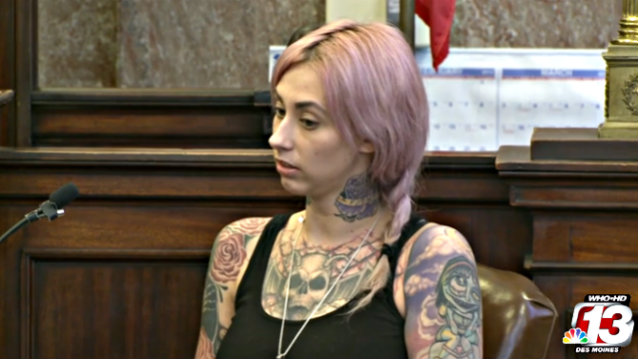 According to the Des Moines Register, the widow of SLIPKNOT bassist Paul Gray testified yesterday (Tuesday, April 22) in the the involuntary manslaughter trial involving the doctor who treated Paul in the days before his 2010 death. While on the witness stand at the Polk Country District Court in Iowa, Brenna revealed that Paul's final weeks were a blur of extreme drug abuse, which neither his doctor nor his bandmates would help his wife confront.

Daniel Baldi is facing involuntary manslaughter charges in the deaths of Gray and eight others. Baldi is being accused of causing the deaths with his careless prescription habits, a claim he denies. His lawyer said Baldi didn't prescribe the drugs that resulted in the death of Gray and several others.

Brenna testified (see video footage at Des Moines Register) that Baldi continued to prescribe Xanax for Paul despite knowing that the musician was a drug addict. "I just knew it was his drug of choice, that he'd struggled with it. So I just wasn't really sure why he was on it, why he needed it along with the medication he was taking for addiction," Brenna said.

Guy Cook, Baldi's attorney, asked Brenna Gray if she knew that among the numerous pill bottles police found in the hotel room where Paul died, only one had contained drugs prescribed by Baldi. He said those pills were Suboxone, a medication for people trying to break drug addiction. He also asked if she was aware that tests done after his death showed her husband overdosed on the painkillers fentanyl and morphine, neither of which Baldi ever prescribed to him.

"You understand, do you not, ma'am, that if Paul got the morphine and the fentanyl on the street somewhere, that it's nobody's fault except Mr. Gray or the person he got it from?" Cook asked her.

Brenna Gray responded tearfully to Cook's question. "I don't know where he got them… It's a hypothetical question. It's not fair."

Brenna also testified that she tried reaching out to some of Paul's SLIPKNOT bandmates just days prior to the bassist's death but that none of them wanted to get involved. "One was playing golf two minutes away from our house but couldn't come," she testified. "Nobody else cared, nobody was involved. They told me it was my problem."

According to the Des Moines Register, SLIPKNOT vocalist Corey Taylor and percussionist Shawn "Clown" Crahan may be called to the stand as witnesses as the trial progresses.

During her testimony, Brenna also revealed she didn't call authorities to alert them of Paul's condition because she was afraid that if she did, she would be arrested for the drugs her husband stashed in their house. She said she also feared their unborn child would be taken by child-welfare authorities.

Brenna revealed in a 2011 interview with Revolver that her husband had agreed to get help for his drug problem just one day before he died on May 24, 2010. Brenna, who said she had dealt with Paul's drug issues several times over the years, explained, "I realized what was going on when I found things at home — then he passed away that Sunday. So I really had no time to make a move. On the Saturday I said, 'Hey, we need to do something. We need to fix this.' He agreed. He was getting ready to go out on tour with (side project) HAIL! and he said, 'I'll go get help after this tour.' But I said, 'You're not going.' I called his manager and told him to cancel. But I think it was a little too late."

Paul was found dead in a hotel room in a suburb of Des Moines, Iowa, where he and SLIPKNOT were based. He was 38 years old.

Brenna said she didn't know what led her husband to drugs, but thinks it had something to do with his childhood. She revealed that his father, who committed suicide, was also a drug addict, adding, "I never pushed him to talk about it because it was such a burden to him."

The young widow also said she was shocked by some of the public reaction to Paul's death, saying, "If he could have controlled (his addiction),he would have. He wanted to be done with it. But it's a life-long disease — even if he stayed clean for the rest of his life he'd still have had the disease."

After a lengthy hiatus, SLIPKNOT resumed touring in 2011, with Donnie Steele playing bass live. The band recently entered a recording studio to begin work on its first album without Gray.

If convicted, Baldi could face up to 18 years in prison.