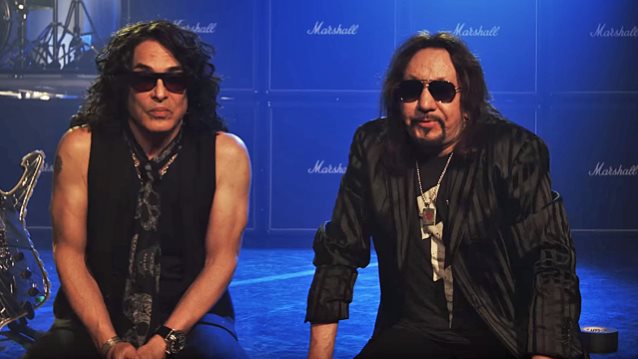 PAUL STANLEY On Possiblity Of ACE FREHLEY Returning To KISS: 'I Don't See It'

Legendary KISS frontman Paul Stanley co-hosted the latest episode of the "Phone Booth Fighting" podcast, recorded at his home in Beverly Hills, California. Paul talked about his love of MMA (mixed martial arts),his particular admiration for co-host Frank Mir's (former UFC heavyweight champion) fighting career, and his Rock And Roll Hall Of Fame body of work that has spanned nearly 50 years. You can now listen to the podcast using the audio player below. A couple of excerpts follow (transcribed by BLABBERMOUTH.NET).

On reconnecting with original KISS guitarist Ace Frehley for an appearance on Frehley's new solo covers set, "Origins Vol. 1", which came out in April:

Paul: "When Ace called… You know, we have a huge and deep history together, and for all the things that we may not agree on, to miss out on an opportunity that could have been really positive and do something together, it would have been a loss. And it turned out, yes, I would have missed out on something really great.

"Ace is a very unique person; there's nobody else like him, I'll tell you. And it's great to see him focused and clean [and] sober.

"To reconnect, it's not even about closure; it's about just opening the door again. And I'm the one who benefits from it. And I wouldn't know unless I did it. If it turned out to be horrible, okay. But I'm not one who wants to live with 'coulda, woulda, shoulda.' I don't wanna go through life going, 'What if I had done this? Maybe I should…' I've got none of those. I have no regrets in my life. Everything got me here, and everything I do will get me into the future. So the idea of being gnawed at by, 'Gee, I wish… What would happen if I did this?' I don't want that. I don't want that. I wanna face everything and see where it takes me."

On whether he thinks his renewed friendship with Ace has opened the door for a possibility of Frehley one day returning to KISS, even if it's just for a limited number of live shows:

Paul: "I don't see it. And, to me, that makes it even better. The fact that you can have people in your life, and maybe who they are and what they are in your life changes over time. Because I'm happy to see Ace and would love to see him… We text. He was on the radio last week, and I texted him, 'I'm listening.' It doesn't need to go further than that, but the fact that it's there is a terrific thing. Reading into it, and where's it gonna lead, and maybe…? There is none of that. There is just the joy and satisfaction in reconnecting — in a different way, perhaps. But it doesn't negate our differences, and that's okay. You can have people in your life. There are things we don't agree about and never will, [and] that's okay. Maybe it goes back to what I said earlier: the best relationships understand the limitations of the relationships."