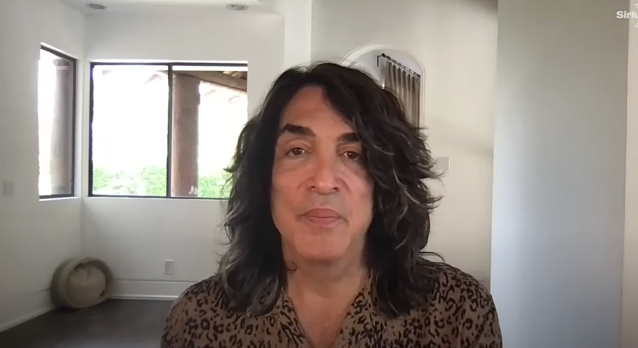 In a recent interview with SiriusXM's "Jim & Sam Show", KISS frontman Paul Stanley was asked why he thinks fans are so attached to the idea of a reunion of the band's original lineup. He responded (as transcribed by BLABBERMOUTH.NET): "Well, the original four are the original four. We were the ones who started this and created the template that we still stand by today. I think where people go wrong is when they think that things can remain timeless and that time doesn't take its toll. You may want mom and dad to be back together, but it didn't work out. And we had amazing moments and amazing times, and we did some phenomenal things together which, look, tie me to them forever. But that's not the fairy tale; it doesn't end there.

"I've said before: we couldn't have been here without Ace [Frehley, guitar] and Peter [Criss, drums], and we couldn't be here today withAce and Peter," he continued.

"I think people yearn for something that is — I was gonna say 'impractical.' I would say impossible. It's great to look back on, but it's not that different than if you break up with somebody and years later you go, 'Wow. Why did that happen? Let me go back.' You go back and it's not the same anymore. And you quickly realize, as we did, why it didn't work out the first time. That's why it didn't work out the second time."

In April 2020, Ace said that he was up for a reunion of the original KISS lineup, but only if the price was right. "Everything's cool," he told SiriusXM's "Trunk Nation with Eddie Trunk" about his relationship with Stanley and Gene Simmons. "What's gonna happen is gonna happen. But everything is delayed at this juncture, so who knows? … I'm doing my own thing. Unless they come forward and the price is right, you're not gonna see me anywhere close by."

Three years ago, Frehley told VintageRock.com that "the only way" he would "seriously consider" taking part in "End Of The Road" is "if I took back my make-up and costume and my character — which I designed." He added that current KISS guitarist Tommy Thayer "is not a bad guitar player, but he basically just mimics everything I wrote, and tries to imitate my persona. He's been doing it for 15 years," he said. "But the reality is I'm the original guy. And nobody can really copy the way I play guitar."

KISS's current lineup consists of original members Stanley and Simmons, alongside later band additions, Thayer (since 2002) and drummer Eric Singer (on and off since 1991).