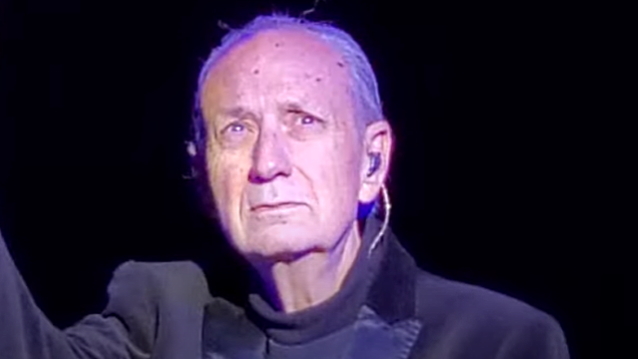 Paul Stanley (KISS),Slash (GUNS N' ROSES),Rob Zombie, Kevin "Noodles" Wasserman (THE OFFSPRING),Charlie Benante (ANTHRAX) and Tracii Guns (L.A. GUNS) are among the rockers who have reacted on social media to the passing of Michael Nesmith. THE MONKEES singer and guitarist died earlier today (Friday, December 10) at the age of 78.

Nesmith passed away of heart failure at his home in Carmel Valley, California, according to his manager. His death was confirmed by his family, which issued the following statement: "With Infinite Love we announce that Michael Nesmith has passed away this morning in his home, surrounded by family, peacefully and of natural causes. We ask that you respect our privacy at this time and we thank you for the love and light that all of you have shown him and us."

Michael's bandmate Micky Dolenz, with whom he last performed in in Los Angeles on November 14, said in a statement: "I've lost a dear friend and partner. I'm so grateful that we could spend the last couple of months together doing what we loved best — singing, laughing, and doing shtick. I'll miss it all so much. Especially the shtick. Rest in peace, Nez."

THE MONKEES tour manager Andrew Sandoval said: "We shared many travels and projects together over the course of 30 years, which culminated in a MONKEES farewell tour that wrapped up only a few weeks ago."

Nesmith wrote such MONKEES songs as "Circle Sky", "Listen To The Band" and "The Girl I Knew Somewhere".

THE MONKEES were formed in 1965 by television producers at NBC creating a show with the same name. "The Monkees" aired for two seasons, allowing the group to continue to record and tour for years afterwards.

WOW! Sometimes it's hard to know why someone's passing hits you a certain way but this is another one that hit me. I watch my world change as people that I thought to be timeless pass on, and that is sobering. Lives end and life goes on. RIP Mike Nesmith. https://t.co/AzeMLLe96F

When I was a kid I loved the Monkees TV show, & Mike Nesmith always seemed so cool. Sad to hear of his passing today. #RIP Here’s a song he wrote & sang for the show. https://t.co/dNudKl6aje

RIP Mike Nesmith. He lives forever in the Underground Garage.

This is sad news. When I was about 9 or 10 my friends and I formed a ‘band’ called The Monkee Juniors. We mimed to The Monkees records in people houses in our street for sweet money. I was the Mike Nesmith in the line-up. He was far more talented than given credit for. pic.twitter.com/w9HeAuVUM6

I’m sorry to hear about Mike Nesmith. The Monkees had some great songs, those were fun days. Love & Mercy to Mike’s family and friends, Brian pic.twitter.com/bqJHBpb7il

Find more on The monkees