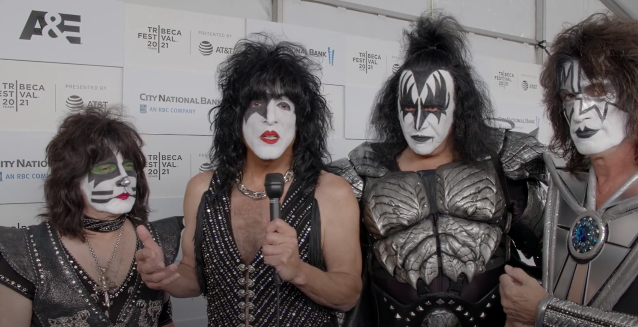 The Rock Experience With Mike Brunn has uploaded a new video interview with KISS conducted on June 11 at the 2021 Tribeca Festival in New York City. For the first time ever, the band played at the festival directly following the screening of part one of its new A&E documentary "Biography: KISStory". The two-part documentary event was part of the festival's 2021 TV lineup.

Speaking about the documentary, bassist/vocalist Gene Simmons said (as transcribed by BLABBERMOUTH.NET): "'KISStory' is a warts-and-all story of four knuckleheads off the streets of New York who decided to go on the yellow brick road off to Detroit rock city. We're here because we believed in a dream when nobody believed in it. Now we rule. Now get out."

Asked why now is the right time to tell the KISS story, Stanley said: "Now's the best time to tell the story because things are at least winding down in terms of playing live. This is the KISS 'End Of The Road' tour. So, to document and to look back upon four and a half decades, a hundred million albums, countless sold-out tours, why not now? This is the time for us to take the victory lap."