PEARL JAM has once again made history, releasing a digital collection of music from a staggering 186 live shows that includes 5,404 individual tracks. Spanning two decades of shows, this gargantuan drop consists of the most sought-after bootlegs from fan favorite tours during 2000, 2003, 2008, and 2013. The release is sure to appeal to the band's diehard fan base while also giving access to a new generation of PEARL JAM fans in the streaming era.

Check out the release here.

Continuing to engage those diehard fans worldwide while also appealing to fans who may not be familiar with the band's tenured live history, PEARL JAM also launched the immersive live web hub, "Deep", on Deep.PearlJam.com. By accessing this hub, fans may search their favorite shows by category and listen to fan-curated playlists, including "Best Of" tours, "Covers", a politically charged playlist "Know Your Rights" and many more. "Deep" will enable easier discoverability across the catalog and allow newer audiences to experience the best of the band suited directly to their personal preferences. Each live bootleg on "Deep" has the added bonus of show descriptions written by Ten Club superfans adding a personal fan story to each and every record.

Due to popular request, PEARL JAM has also unveiled the ability to create your own personalized setlist, using the Custom Setlist Generator. Creating the setlist each night is usually reserved for Eddie Vedder and fans have long wanted the ability to create their own. By inputting your name and birthday, you can receive a custom streamable setlist playlist and setlist graphic generated in Eddie's instantly recognizable handwriting for sharing across your social media. The Setlist also transforms into a streamable, custom playlist that has the added bonus of various Ten Club superfans written personal descriptions for the bootlegs, adding a personal fan story to each and every record.

Just over a year ago, PEARL JAM unveiled their latest album, "Gigaton", to widespread critical and fan praise and a Top 5 debut on the Billboard Top 200. It graced year-end lists by Mojo, Consequence Of Sound, Insider, and more. They will embark on the "Gigaton" tour soon. 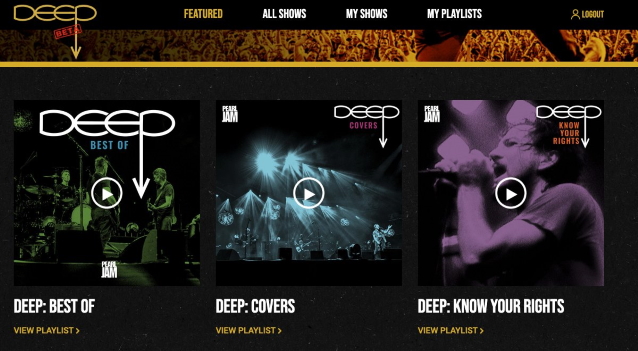