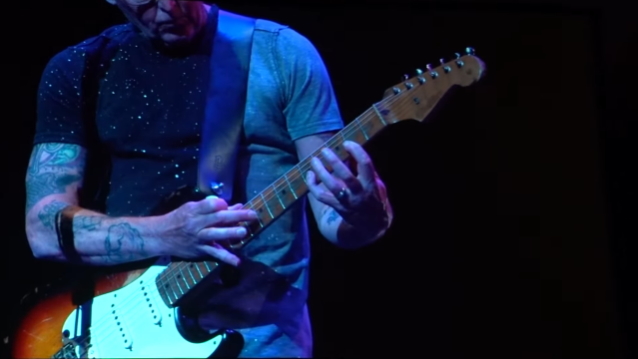 The performance took place on May 9 during PEARL JAM's concert at Gila River Arena in Glendale, Arizona. McCready played the song after frontman Eddie Vedder gave a short speech on musicians and friends he and his PEARL JAM had lost in recent years, saying: "I don't think we've played a show since Eddie Van Halen passed away, and he was another legend that we miss. And so we've been wanting to play one for him."

McCready discussed Eddie Van Halen's passing during an appearance on SiriusXM's "Trunk Nation With Eddie Trunk" in October 2020. At the time, he said: "I started playing guitar a year after that first [VAN HALEN] record came out, and he was just the most untouchable, unreachable guitar player I've ever heard — besides [Jimi] Hendrix. But it was even more, in a way, because it was right then I was becoming a new guitar player. And Eddie Van Halen kind of turned everything upside down. And he was the most exciting thing to come out. And they had cool songs. It always felt like the summer was coming on. It was a great party band. They also were amazing musicians and great songwriters."

Asked what his first exposure to VAN HALEN's music was, Mike said: "I heard the first record [through] my guitar teacher. He played me 'Eruption'. And when you're a kid learning about Ritchie Blackmore and Ace Frehley and things like that… He played that for me, and it sounded like it was from another planet. Subsequently, VAN HALEN came [to Seattle] about a year, on the second record, and I saw them for that tour, and then three more times after that with David Lee Roth. So seeing them live on the second tour was unbelievable. Eddie did 'Eruption' live, and he ran into his amps and they almost fell over, and they came back. Everything about them was perfect as a rock band. Seeing them live on the second tour was one of the best shows I've ever seen. And it changed my life, for sure. And because of Eddie's playing, for sure."

According to McCready, he is not the only member of PEARL JAM who has a deep appreciation for VAN HALEN's music.

"Everybody in PEARL JAM has a VAN HALEN thing," he said. "I think Eddie [Vedder, vocals] saw 'em open for [BLACK] SABBATH in San Diego, as I think Matt [Cameron, drums] did. And Jeff [Ament, bass] saw 'em on the first tour in Montana. So there's a VAN HALEN connection throughout PEARL JAM — it's there. I mean, I do 'Eruption' sometimes, because I wanna learn how he did that. And it's such an amazing thing, I had to learn it note by note. And I still don't have it down, but it's one of those things that was just always this high-water mark, and it still continues to be for me. 'Cause when he does that, he has such a feeling behind his playing that no one else can really get when you try to tap and all that kind of stuff — at least in my mind."