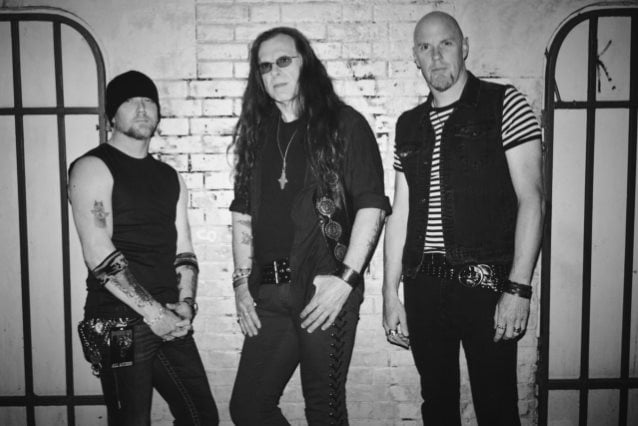 As was the case for the recently completed U.S. shows, legendary U.S. heavy/doom metal band PENTAGRAM will play its previously booked European tour dates this summer without frontman and founding member Bobby Liebling.

PENTAGRAM explains in a statement: "Bobby called on April 17 saying he had been admitted to the hospital. He called again on April 19, this time after being transferred to a Maryland detention facility. He's now awaiting a preliminary hearing at which time it will be determined if a follow-up on any alleged charges are necessary. An update will be published when information is available. The band will be fulfilling all currently booked appearances with 36-year mainstay guitarist Victor Griffin performing all vocals."

Griffin, bassist Greg Turley and drummer Pete Campbell last month released a statement in which they blamed Liebling's absence from the gigs on "circumstances that are beyond anyone's control, that are a direct result of Bobby Liebling's personal actions."

Liebling was the focus of "Last Days Here", the critically acclaimed 2011 documentary that detailed his lifelong struggle with drug addiction and followed him as he revived PENTAGRAM in his 50s while emerging from his parents' basement to start afresh with a wife less than half his age and their newborn son.

PENTAGRAM adds in a "a personal note": "The outpouring of support on our recent U.S. dates was outstanding! Your energy was matched tenfold and encouraged us to carry on and deliver what many have called, even by skeptics, some of the best PENTAGRAM performances they've seen. Thank you!

"We have the best fans in the world and if not for you, the legacy of this band would have died long ago. We won't let you down now. The music lives on and as we move forward, we reiterate the lyrics of 'Curious Volume':
'In this venture, death waits in the shadows, but in survival, the volume won't die!"