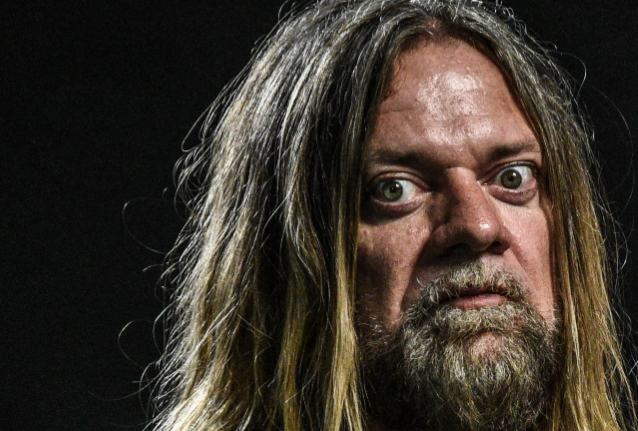 PEPPER KEENAN On CORROSION OF CONFORMITY's 'In The Arms Of God': 'I Still Think It's The Best Thing I've Ever Done'

Pepper: "I guess the biggest thing for me was that the last album I was on with those guys was [2005's] 'In The Arms Of God'. That was, at the time, when that came out, that was my pinnacle, that was the best I could do. I was patting myself on the back on that. I still think it's the best thing I've ever done. It took a lot of work and it took a lot of weird energy and all kind of stuff to happen, so when it came time to do another record, we kind of got back together and started hanging out and we suggested we go to Europe to play some shows and see what happens. We didn't have a record label, we didn't have booking agents, we didn't have shit. We called some buddies up and they booked us some shows in Europe: 'Yeah, it's the original lineup. Pepper is back in the band, and blah, blah, blah.' We went over there and played some shows and it worked out pretty fucking good. People came out to the shows and we got a record deal, but when it came time to do the record, I was fucking nervous — I ain't going to lie to you. We don't spit these things out; I ain't going to put out no bullshit. I didn't want it to seem like it was some reunion money cash-grab. If we're going to do it, we're going to do it for real. We toured for two years getting our shit together, getting our craft a little better, figuring out what direction we're going to go. This is the god's honest truth: We're playing a show in England at some art center, but it was a refurbished cathedral and it's a beautiful place. A cathedral. They turned it into a concert venue. We're in there and we're sitting in the dressing room which is where the bishop stayed and shit, I guess, whatever the fuck they are. But we're sitting in this room and there's stained glass windows everywhere. It's drop-dead gorgeous. I'm looking at the stained-glass window and the bottom of it has got a guy getting persecuted and it says 'No Cross No Crown'. I'm sitting there looking at that. Man, me and Woody [Weatherman, guitar] are going, 'Do you see that?' We both at the moment we're like 'That's the title of the record.' It just echoed in our head so clearly. At that point, we inked a deal with fucking Nuclear Blast and we were off to the races. Once you got that concept in your head, it was fill in the blanks."

Pepper: "I think the reason we started doing that kind of thing is because we were music fans as well. To be honest, the way the whole thing started is that when we were recording the 'Deliverance' record, that record was recorded on a little label called Relativity Records. We had done that record for pennies on the dollar. We had John Custer working with us and they couldn't believe the way it sounded for how little money we spent on it. One thing came to another, not many people know this story, but Columbia Records, they had gotten a hold of the demos we were doing for that record. And so they wanted to buy C.O.C. from Relativity Records and Relativity said, 'No. Hell no.' It didn't happen. A couple of weeks later, one of the head honchos from Columbia Records contacted me and told me to go buy The New York Times newspaper and go to the financial section and go to page whatever and look at the bottom. It said 'Sony/Columbia Records acquires Relativity Records.' They bought the fucking label and turned it into a distribution company and took us off of it. [Laughs] We were kids, man. I was dirt broke in New York City riding a bicycle around. So that was kind of the game changer. Then, they came back to us when they had the tracks in their hands and they said, 'You guys, is this what's in your heads?' We weren't quite finished yet. They hooked us up and put us in Electric Lady Studios, Jimi Hendrix's place, and said, 'Finish the record.' We went apeshit. We fucking made the record that was in our brains, that we were close to, but it was a luxury at that time in the '90s. that kind of shit doesn't happen anymore. But it was fun and it was challenging. Basically, my story is, now our standards are pretty high. We try to achieve something like that even though we have much smaller budgets nowadays. I'd rather go to a shitty studio and spend three months than a fancy studio and spend a week."

CORROSION OF CONFORMITY will return to Europe in April and May 2020 for a 16-date tour. The trek will include 12 headline shows with support from Arizona's SPIRIT ADRIFT. The remaining dates will be festival shows, including appearances at Desertfest London and Berlin.

"No Cross No Crown" came out in January 2018 via Nuclear Blast Entertainment. The LP — recorded in North Carolina with longtime producer John Custer — was the group's first studio effort with Keenan in more than a decade.