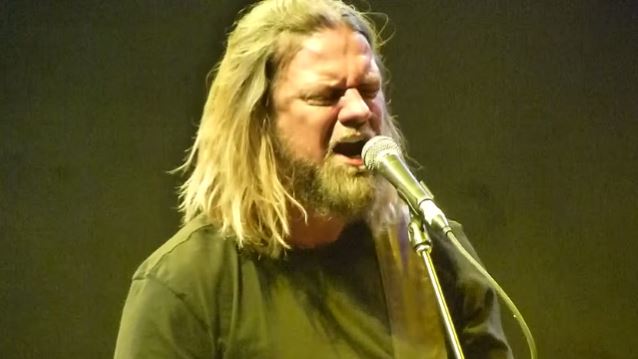 PEPPER KEENAN On Songwriting For Next CORROSION OF CONFORMITY Album: 'It'll Be Very Focused'

CORROSION OF CONFORMITY guitarist/vocalist Pepper Keenan was interviewed on the December 4-6 edition of Full Metal Jackie's nationally syndicated radio show. You can now listen to the chat using the Podbean widget below. A few excerpts follow.

Full Metal Jackie: You're back with C.O.C.Woody [Weatherman, guitar], Mike [Dean, bass] and Reed [Mullin, drums] were already playing together for years before you rejoined. What made it easy for you to fit right back in when you got involved again?

Pepper: We had been talking about it for a long time, and it felt like it was time, 'cause there was so much talk about it, and everybody was kind of getting on our asses to get it in gear. We even had a couple of record companies poking around, going, "What are you guys doing?" We decided, "Let's just go to Europe and play some shows and see what happens and see how it gels." I rehearsed on my own and then I went up there to North Carolina for a couple days. I mean, it literally just took off. I think we're playing better now than we were back then, to be honest with you. And so it really was a pretty exciting thing. Like I said, we went to Europe and then opened up a whole can of worms over there. We got invited back two more times, like weeks later, added to festivals and stuff, and it just kinda went from there. I guess, the main thing is that we were just playing well together. I think everybody's in tip-top shape, and that made it a lot easier.

Full Metal Jackie: You're involved in all kinds of music, not just C.O.C. What's different about the satisfaction that you get from playing C.O.C. songs compared to other music you play?

Pepper: The strangest thing about it, to me, is that some of the songs are 20 years old, and I haven't touched some of these songs in 20 years. I never thought I'd be that guy, you know, going backwards, but the songs stand the test of time, and they work really well. It's been a head trip, really, going backwards like that and having so many people come out and trip out on it. Even new fans — people who've never seen us before. Like, we just did a tour with CLUTCH and some shows with MASTODON, and there were oodles of people that would come up and say, "Man, I've never heard you guys before," and they were just blown away, which is great, 'cause we were playing songs… We haven't even done a new record yet. So, on that edge of things, that was the craziest part about it.

Full Metal Jackie: It's been a long time since all four of you made an album together. What was the starting point for the album you'll release next year?

Pepper: I think the catalyst that, I think, we agreed to leap off of was the last record we did, called "In The Arms Of God", which, to me, was… I've told people before, that's about as good as I can do it. Everything was firing when we did that record. And Reed wasn't on that record, but the guy who played drums [on it] was somewhat emulating Reed Mullin in a jazzy kind of way — a friend of mine from New Orleans. But that record, to me, was…. That's the pinnacle of, I think, the C.O.C. songwriting. So, we're gonna kind of launch off from there and try and use that as a measuring stick to go from. It's a pretty tall order to come back and do a record like that, and we don't take it lightly. And we know the amount of heat that's on us. But first things first. We've just gotta jam and get the riffs organized and really focus on making a serious cohesive album.

Full Metal Jackie: Your new song, a LYNYRD SKYNYRD cover of "On The Hunt", was actually recorded over ten years ago. Why did you decide to finally put it out now?

Pepper: We'd been sitting on it for so long, and I was listening to it, and [I thought], "Man, this thing is freakin' killer." And [since] I was back in the band, you know, it would be a good little thing to get people talking, and it were just sitting there, so… Not to mention it sounded great. I really thought it was a really… I'm a SKYNYRD freak, you know, as are some of the other guys in the band, so we thought it was a valuable thing to put out and let people know that we're kind of snooping around and getting our heads back out there.

Full Metal Jackie: Individually and together as a band, what's most different now about C.O.C. as musicians and as people?

Pepper: Man… Just time, you know. I think we're a little bit more civilized — not much. Playing-wise, we're playing great. I think when we get in the studio, it'll be very focused. I think we're more open to each other's ideas, and I think the end product is gonna show that it's… Everybody in the band can play; there's no weak links on here. And everybody, like I said, is in good shape and really getting it on. So that's the big factor for me. If I didn't think I could do it — I hadn't sung in over ten years — if I didn't think I could do it, I wouldn't do it. But as of now, everything's fine. so I think the biggest difference is just that we're older. But we still… I mean, it's C.O.C. — it's just a bunch of punk rock kids from a different era that still put their nose to the grind and don't bitch about anything.

Full Metal Jackie: I know that there's some C.O.C. touring for the next couple of weeks. Tell us about the timeline for 2016.

Pepper: We finish up this U.S. headlining tour, which starts in Atlanta and ends in Raleigh, North Carolina. So we're going around the whole block, including some places in Canada. And then we get back. And I'm guessing… We're playing a Florida death metal festival. OBITUARY has got a festival down in Florida and they want us to headline. They're big fans, so we're headlining down there in early January. And then it's time to start getting together and organizing some riffs and start demoing stuff.

Full Metal Jackie: Looking forward to hearing more from you guys, everyone is excited for this tour. Really appreciate you taking the time.

Pepper: I'd like to say that we've had a ton of support, man. So many people got our backs and are rooting for us, and we couldn't do it without that. Industry people and fans, everybody included, they've really came out of the woodwork to lend us a hand and offer assistance or help, or advice, or anything we needed, which goes a long way. So it feels good to have people rooting for you like that. And we do appreciate it. From the fans and industry people alike.