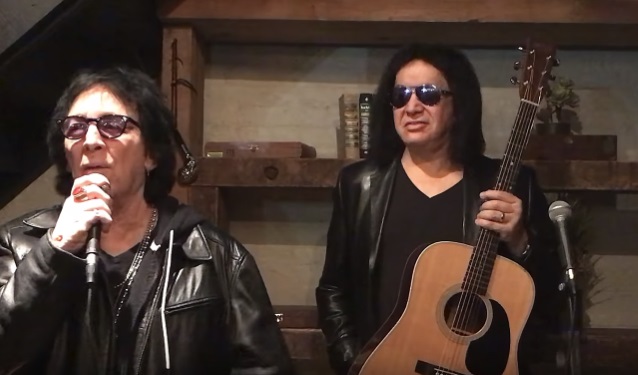 After being introduced by Gene as "the powerful and the attractive, the original, one and only, Peter Criss," the drummer took the microphone and told the crowd (see video below, courtesy of Mike Brunn): "Hi. It's good to be here. It's good to see you. It's good to be here. I'm feeling great. I had to come and say hi to my bass player from my old band KISS. [Laughs] No. Really, Gene sent me a wonderful invitation; I couldn't resist. And we haven't seen each other since the [Rock And Roll] Hall Of Fame. Out of all the bandmembers, we always had a Twinkie thing going, and way back in the day…" At this point, Simmons chimed in, "He means cake," before Criss continued: "So I had to come in and say hi to him. I do have a big place in my heart for Gene — I always will, out of all the members. So it's good that you came down for him. He loves to be loved, so give him all the love you want, and he'll take it all in. And God bless you all, and thank you so much."

In addition to playing drums in the band, Peter also provided lead vocals for a number KISS's most popular and memorable songs, including "Beth", "Black Diamond" and "Hard Luck Woman".

KISS did not perform — the Hall Of Fame wanted the original quartet only to play, while Simmons and Paul Stanley insisted on the current lineup — which also includes guitarist Tommy Thayer — performing as well. In the end nobody won that battle.

Original KISS guitarist Ace Frehley has made appearances at a couple of the "Vault Experience" events so far, while ex-KISS axeman Vinnie Vincent is expected to join Simmons on April 14 in Nashville, Tennessee.