PHIL CAMPBELL To Perform MOTÖRHEAD Classics On May 2022 U.K. Tour

PHIL CAMPBELL AND THE BASTARD SONS, the band featuring MOTÖRHEAD guitarist Phil Campbell alongside his sons Todd, Dane and Tyla, will embark on a U.K. tour which will see them play a set of MOTÖRHEAD classics.

The group, which is rounded out by vocalist Joel Peters, will play 11 U.K. shows starting on May 7 at Merthyr Tydfil Redhouse Cymru and ending on May 21 at Bradford Nightrain.

Phil Campbell says: "Looking forward to SLAMMING out some MOTÖRHEAD classics to make your ears bleed one more time."

PHIL CAMPBELL AND THE BASTARD SONS' latest album, "We're The Bastards", came out in November 2020 via Nuclear Blast.

Formed in the aftermath of MOTÖRHEAD's dissolution, following the death of Lemmy Kilmister in December 2015, PHIL CAMPBELL AND THE BASTARD SONS were always going to draw a crowd at any discerning rock or metal festival. Led by one of the genre's most respected guitarists, the band emerged onto the 2017 touring circuit powered by a huge amount of good will, a smattering of MOTÖRHEAD covers and a handful of new songs that crackled with passion and swagger. Landing themselves a prestigious support slot on GUNS N' ROSES 2017 summer stadium run, the BASTARD SONS hit the ground running.

Fast forward to 2020 and, just like everyone else, PHIL CAMPBELL AND THE BASTARD SONS had to cancel a lot of carefully laid plans when the global pandemic descended on us all. But as if to confirm their absolute dedication to blowing people's heads off with thunderous rock 'n' roll, the band refused to cancel plans to record a follow-up to their widely lauded debut. Recorded and engineered during lockdown by guitarist Todd Campbell, the second BASTARD SONS album is called "We're The Bastards" and it was described in a press release as "bigger, better and even more raucously uplifting than its predecessor."

In October 2019, Phil Campbell released his first-ever solo record, "Old Lions Still Roar". The album, which had been in the works for more than five years, included guest appearances by Rob Halford (JUDAS PRIEST),Dee Snider (TWISTED SISTER) and Alice Cooper, among others. 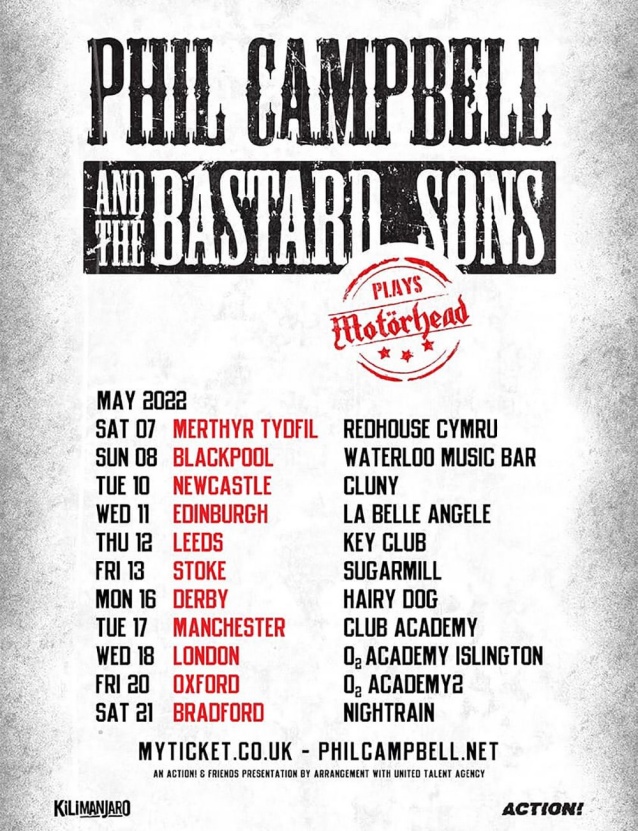