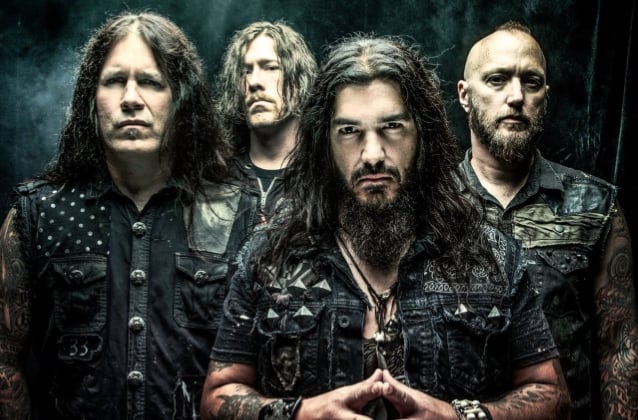 On the 13th anniversary of the release of MACHINE HEAD's "The Blackening" album, frontman Robb Flynn hopped on Facebook Live to stream an impromptu guitar run-through of some of the LP's deeper cuts. Check out video footage below.

In a March 26 e-mail blast to its mailing list, MACHINE HEAD stated the following, in part, about "The Blackening": "While ex-guitarist [Phil] Demmel is often viewed in the media as the savior of the band, 85% of the material on 'The Blackening' was written by drummer Dave McClain and guitarist Robb Flynn, with Robb playing all guitars on the album, including rhythm, lead, all intros, harmonies, and all dueling lead guitar harmonies. McClain wrote the main riff in 'Halo' and Robb wrote all of 'Aesthetics Of Hate'."

That same day, Demmel took to his Twitter to apparently address MACHINE HEAD's characterization of his involvement with the record, writing: "13 years ago. Proud of this record and my contributions. 'Beautiful Mourning', 'Slanderous', 'Now I Lay Thee Down' and 'Farewell To Arms' simply do not happen without them. Thanks for all the kind words and continued support from all the Head cases."

When one fan on Twitter told Demmel, "Sad that the email sent out to the mailing list tried to downplay your contributions. That record wouldn't have been what it is without the entire band at the time.", he responded: "Yeah, right? Sometimes ALL of the glory isn't enough."

Demmel announced his exit from MACHINE HEAD in October 2018, explaining at the time that he wanted "to step away and do something else musically." Phil, who first played with Robb in VIO-LENCE in the late 1980s and early 1990s, went on to complete the Flynn-fronted act's "Freaks & Zeroes Tour" before officially leaving the band.

Last year, Demmel told the "In The Pitts Of Metal And Motor Chaos" podcast that MACHINE HEAD ended up becoming a Flynn solo project toward the end of his time with the group. "We weren't a band," he said. "That was Robb's trip, and we were basically just being told what was gonna happen… Everything had changed over time. Shit, we were together for 16 years and stuff changes after that. It's been the band that he started. So things shift, and as they weren't what we agreed to or what we wanted to be a part of, [McClain and I] just left. So we do our own thing, and he does his thing."

Demmel also said that the musical side of MACHINE HEAD took a sharp turn for the worse during the writing stage for 2018's "Catharsis", an album that he said he hated.

13 years ago. Proud of this record and my contributions. Beautiful Mourning, Slanderous, Now I lay thee down and Farewell to Arms simply do not happen without them. Thanks for all the kind words and continued support from all the Head cases. pic.twitter.com/G9CEPrLBr0

Yeah, right? Sometimes ALL of the glory isn’t enough.

Cunty is in the eye of the beholder ✌🏻

My favorite. And despite bitterness saying otherwise, I played it.