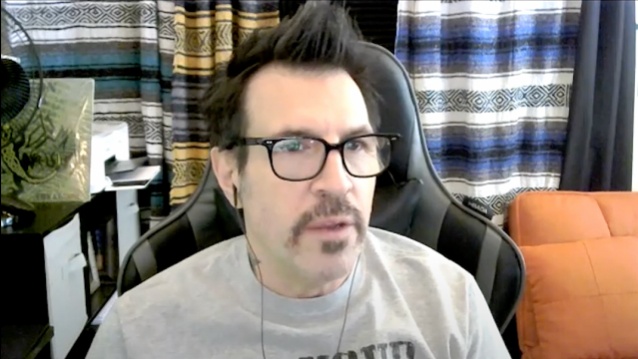 PHIL VARONE Recalls His Disastrous OZZY OSBOURNE Audition: 'It Was Like I Never Played Drums Before In My Life'

In a brand new interview with Meltdown of Detroit radio station WRIF, former SKID ROW and SAIGON KICK drummer Phil Varone recalled a disastrous audition he had in 2000 to play in Ozzy Osbourne's solo band. He said (as transcribed by BLABBERMOUTH.NET): "Rachel Bolan from SKID ROW, him and I had a band called PRUNELLA SCALES. So we did a record in '97. And then in '98, I decided that I'm just gonna call it a day and buy a restaurant, which was like… That was the worst damn decision ever. And [I] lost everything from that. I took every last penny I had and put it in this restaurant and that went under 'cause I didn't know what I was doing. It's like life lesson after life lesson.

"In 2000, I moved out to L.A. 'cause I figured, 'I've gotta be out in something. I'm gonna give it a shot.' And I was living over at John Corabi's [ex-MÖTLEY CRÜE] house. I heard that Ozzy was auditioning drummers. So I called Vinnie Paul — the late, great Vinnie Paul from PANTERA — and I go, 'Vin, can you get me into this audition?' They were only auditioning a handful of guys. And Vinnie calls Sharon Osbourne and gets me an audition. Incredible, right? I go down there. Crabby [Corabi] comes with me for support. And boy, I don't know what happened, but it was like I never played drums before in my life. It was incredible. I got Popeye arms, which means I just tensed up so bad, I couldn't hold the drum sticks. So I was probably like a monkey back there — I could not play. And it was all the great songs — 'Crazy Train' and all the stuff that we played as kids. And it was brutal.

"Do you know, till the day Vinnie died, and I saw him two weeks before, he'd bust my balls about that damn audition," Phil continued. "Every time I saw him, he'd go, 'Dude, what the hell happened with that?' 'Cause Sharon Osbourne called him and went, 'Vinnie, what is this? A joke? This guy can't play for anything.' She got mad at him 'cause she thought that he was doing a joke on her, like playing a joke. That's how I bad I was. And Crabby — God love him — he was, like, 'Ahhh…' I figured he can help me 'cause he auditioned for MÖTLEY. He was giving me pointers. Yeah, it was bad. I knew when I walked out of there and Crabby was, like, 'Ahhh…' But soon after I joined SKID ROW. So it all ended up okay."