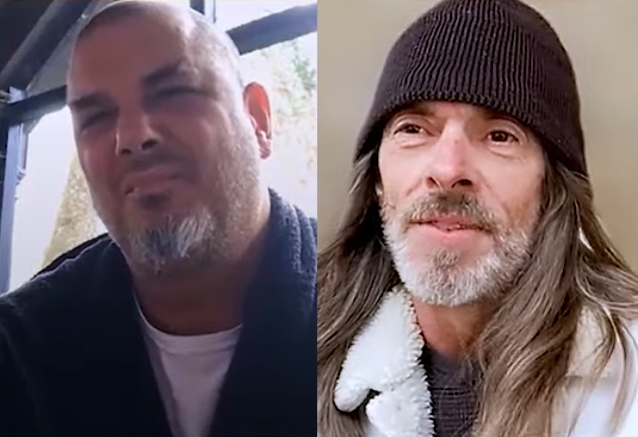 To celebrate the 30th anniversary of PANTERA's classic sophomore major label album "Vulgar Display Of Power", Revolver has uploaded a joint video interview with the band's vocalist Philip Anselmo and bassist Rex Brown conducted by Jimmy Hubbard. You can now watch the chat below.

Speaking about "Vulgar Display"'s legacy three decades later, Anselmo said (as transcribed by BLABBERMOUTH.NET): "Correct if I'm wrong — is 'Vulgar Display Of Power' the one record that we play the most of it live, out of all the other records, the most material. I mean, does that not say it all? It's not our choice, really — it's what we get from the crowd; it's what they wanna hear; it's their choice what songs we play, really. Don't get me wrong, PANTERA plays and there's a contingency of people out there that wanna hear something that we had never really played; of course people are gonna do that. But for us, we can't leave off the big songs; we can't. You can't go see PANTERA and not have us play 'Walk' or 'Fucking Hostile' or one of them songs — 'Cowboys From Hell', any of that shit. So the fact that 'Vulgar Display' holds the most of those songs, man… And I'm sitting here thinking about how Vince [late PANTERA drummer Vinnie Paul Abbott] and Dime [late PANTERA guitarist 'Dimebag' Darrell Abbott] would feel about this legacy, and, of course, they would be ecstatic; they would be over the moon."

Added Rex: "It was our staple; it was our stamp. In hindsight, that record changed a lot of ballgame for us. And we were just making a record — but our way. Finally — our way. The way that we wanted to do it. And the tightness that came with that and the confidence that we had struggled before it, when we finished it, that was dividends in itself."

Philip concurred, saying: "It felt like an accomplishment, getting the damn thing done. You mentioned before, did we know it was gonna be huge, and we both answered no. You don't know what a record's really gonna do or who's gonna like what, but the fact that it has touched people like yourself, Jimmy, and so many people. A lot of the fans that I meet, and I'm sure it's the same for Rex, that's probably one of the first things they say: 'Oh, man, 'Vulgar Display'.' Most of 'em. That says it all."

In a 2017 interview with the WGRD radio station, Vinnie Paul spoke about the 25th anniversary of "Vulgar Display Of Power". He said: "I never ever think about [how long it has been since the record was released]. It certainly doesn't feel like it at all, man; it feels like it was yesterday, almost. But looking back on it, it really was a groundbreaking record for heavy metal. It really set the tone for what modern-day metal bands do. They still use that record to A-B their records to — getting their guitar sounds, their drums sounds, this, that and the other. So it really was special, and I'm really proud to have been a part of it."