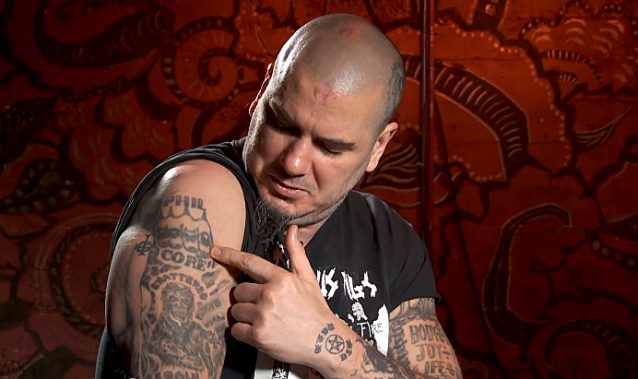 PHILIP ANSELMO: Behind The Ink

Former PANTERA and current DOWN singer Philip Anselmo recently took Fuse on a guided tour of his tattoos, revealing the hidden meanings behind the ink. Check out the footage below.

Anselmo's first-ever solo album, "Walk Through Exits Only", sold around 8,700 copies in the United States in its first week of release to debut at position No. 35 on The Billboard 200 chart.

Asked what fans might be surprised to see in his forthcoming autobiography, tentatively titled "Mouth For War: Pantera, Pain, & Pride - Heavy Metal Highs, Drugged Out Lows, & The Battle For My Life", Anselmo told The Washington Times: "There's a lot of stories and a very, very interesting journey to fuckin' even get to the PANTERA chapters. It took quite a while and quite a lot of different craziness in my life to even fuckin' get to the point to where I was able to join PANTERA. So, a lot of shit happened before PANTERA and then obviously the PANTERA days were fucking insane in their own way. Since the death of Dimebag and the breakup of PANTERA before that, a whole lot of shit has happened, as well, both horrific and pretty damn fucking good."

He continued: "These days, man, you know, it's like I'm ten years clean from any fucking hard drugs at all and fuckin' haven't touched a drop of whiskey since 2001. Honestly, there's a big, I guess, educational, if you want to put it like that, portion of the book that shows there's somewhat of a ray of light even at the fuckin' lamest part of your life or the lowest part of your life. If people can learn from me, good, good for them. It's gonna be an interesting book."