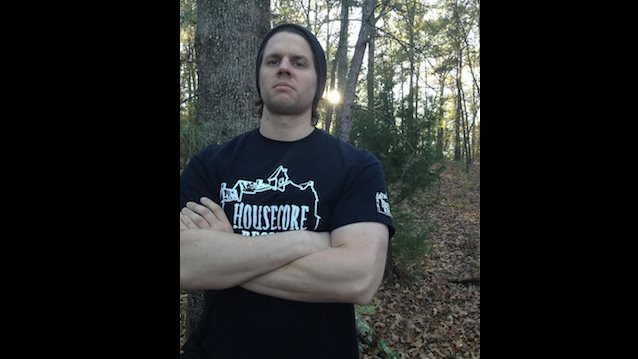 Adam Crosier, vocalist/guitarist/songwriter for the band HYMNS, an avant-garde metal group hailing from Fayetteville, Arkansas, has defended Philip Anselmo against accusations of racism, saying that the former PANTERA singer is "one of the most caring, compassionate, loving, and intelligent individuals" that he has ever met.

Now Crosier, whose band is signed to Anselmo's Housecore record label, has weighed in on the topic, posting a message on his Facebook page in which he said that accusations of racism against Philip "could not be further from the truth."

He wrote: "This slanderous attack against Phil Anselmo in the metal media right now is reaching a despicable level of ugly; inept judgment...and I feel it is necessary for me to now address the accusations of Philip.

"I have known Phil Anselmo for a little over six years now...and there are no words that can accurately describe how false the racism claims truly are.

"Philip is one of the most caring, compassionate, loving, and intelligent individuals that I have ever met. He truly wears his heart on his sleeve and is the most honest person I know. Fame and success never changed Philip's personality — he treats everyone as equals and with absolute respect; as long the person deserves that respect and conducts themselves in an appropriate manner.

"I've toured with Philip, worked with him musically, and I have spent a lot of time talking and hanging out with him over the years. I talk to him quite frequently since we are close friends now, and we have talked about every topic you could possibly imagine.

"In regards to the topic of racism — I know, without a doubt, that Phil Anselmo is NOT racist. This accusation could not be further from the truth.

"I could list numerous examples of Philip's impeccable character to reflect on why I feel so strongly about this...but I don't feel it's necessary to discuss all of our personal life encounters. However, I feel there is one example that could shed light on why the racism claims aren't true...

"For those of you unaware, Phil is an avid boxing fan and has a remarkable amount of knowledge on the sport. In fact, he knows so much about boxing... that Emanuel Steward, legendary boxing trainer who trained the long-reigning champion Wladimir Klitschko, would call Philip before EVERY Klitschko title fight/defense. Emanuel would ask Philip for his opinions on the opponent and his suggestions on strategy for the fight. The two would talk for hours. They loved and respected each other tremendously, and they made sure they let each other know that. If Phil Anselmo was truly a racist or 'white supremacist,' why would he take hours of time out of his insanely hectic schedule (and believe me, his schedule is stacked full 24/7) to talk to an African-American boxing trainer; and speak to him with the utmost respect? Why would he tell Emanuel he loves him dearly? Why would he take the time to appear at Emanuel's funeral after he died of colon cancer? Do you think a white supremacist, neo-Nazi, racist lunatic would really go to such great lengths to show immense compassion for an African-American? The answer is no — someone who is truly racist would never even entertain those notions. If anyone doesn't believe or understand that...that individual needs to educate themselves on what it means to truly be a racist.

"I cannot stand by and be silent amidst all of these ridiculous attacks against Philip's character or integrity. If any of the people who made these bogus claims about Philip knew him personally, they would be ashamed and embarrassed for the remarks they made.

"I'm ashamed to be part of a metal 'community' today that reacts in such a sanguine judgmental manner towards one of the greatest metal musicians/vocalists of all time."

Crosier added in a separate note to BLABBERMOUTH.NET: "I know what Philip said was inappropriate, I'm not denying that. But I know Philip's personality/character and know that he isn't 'that guy.' He honestly is very far from that ugly of a person. I think he has just made some mistakes in the past and obviously at the Dimebash — which added together may paint an ugly picture of his personality. It's very unfortunate, because he truly is a very compassionate and loving person."