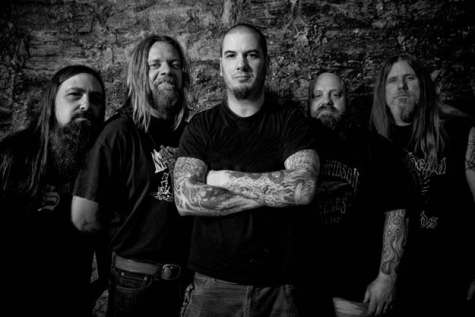 PHILIP ANSELMO On New DOWN EP: 'It Has That Practice-Room Vibe To It'

On May 2, Patrick Musumeche of Full Metal Rock conducted an interview with Philip Anselmo (DOWN, PANTERA, ARSON ANTHEM, SUPERJOINT RITUAL). You can now listen to the chat in the YouTube clip below. A couple of excerpts follow.

On what fans can expect from DOWN's recently completed six-song EP, which is tentatively due at the end of the summer:

Anselmo: "I would say you can expect a very realistic product, very stripped down. Nothing flashy. Straight to the point… really just DOWN music. If you liked the first record [1995's 'NOLA'], the demos… something like that… This record, we're pretty dead straight and honest and on the money as far as making it as simple and direct as possible and I think we did that. . . It has that practice-room vibe to it. We didn't really try and fucking slick it out and anything. We went the more raw route, as far as an approach. Once again, you've gotta hear it for yourselves and you guys will be better judges than myself at this point."

On performing at the third installment of Samson's "Metal Masters" series, which was held on April 12 at the Key Club on the famed Sunset Strip in West Hollywood, California:

Anselmo: "[It was] fun. A clusterfuck, but fun. Man, I love them fucking dudes [the other musicians performing at the event] with all my fucking heart. There ain't a bad cat up on that stage, man. A couple of guys I just met, like the new guitar player from MEGADETH [Chris Broderick]; he's a very nice guy. But I've known Dave Ellefson [MEGADETH], Kerry King [SLAYER], [Charlie] Benante [ANTHRAX], [Dave] Lombardo [SLAYER]… Even… Fuck, I've known Mike Portnoy [ADRENALINE MOB, ex-DREAM THEATER] for years because he used to come out to New York shows just to talk boxing. We were both tape-traders back in the day, as far as fights go and shit like that. I can't even tell you how genuinely nice and professionaly and funny and fucking cool these guys are. Even the fucking roadies, man, I've known them for years and they're fucking fanstastic. Everybody… But it was fun."

DOWN entered the studio last October to begin recording the first in a series of four EPs, to be released over the next few years (with a year between EPs),each touching on a different aspect of the band's sound.

The first six-song EP, which heralds the sound of DOWN going back to its roots, with influences from BLACK SABBATH, SAINT VITUS and WITCHFINDER GENERAL, was previously described by Anselmo as "a very pure doom metal record."

The track listing for the effort is as follows (in no particular order):

Speaking to Jerel Johnson of Target Audience, Bower stated about DOWN's new EP, "We went for a really raw sound and went back to [the sound of the first DOWN album] 'Nola'. The songs are really SABBATH-ed-out. I'm really happy the way it came out. It's really aggressive and raw. All them rock n' roll adjectives in there, bro. It's doomy!"

He continued, "The idea is we're doing four EPs and the first one is pretty much cut-throat. The third one is supposed to be the acoustic one. But we're releasing four EPs within the next year and a half. They all coincide with one theme. Like the artwork and everything. It's like a big story. . . It was recorded at the Lair again (Anselmo's his barn studio, Nodferatu's Lair. The studio's name is a play on classic horror film vampire Nosferatu, altered to reflect certain musicians' tendency to nod off.),the same place we did 'Down II' and recorded it at a New Orleans studio. The last record, 'Over The Under', we recorded in L.A. because a lot of the studios weren't up and running after Katrina. So it was really nice to stay home and have that New Orleans vibe in the record to as well. Makes a difference, man."

When asked if there are any songs on the new EP that stand out, Bower said, "'Witchtripper'. It sounds like DOWN, and I'm really excited about it. I'm more excited about it than 'Over The Under'. 'Over The Under' was a great record, but I think the production was a little too much, and this takes us back to the raw roots and the songs are good. But 'Witchtripper' is my favorite one. We were in Spain for a festival, and walking around and we kept seeing rocks on people's doors. We were like, 'Dude, it must be to trip a witch.' At first, it seemed kind of silly, but once we wrote the song and lyrics — Philip wrote the lyrics — it was really cool. Hopefully we'll make a video for it, too."