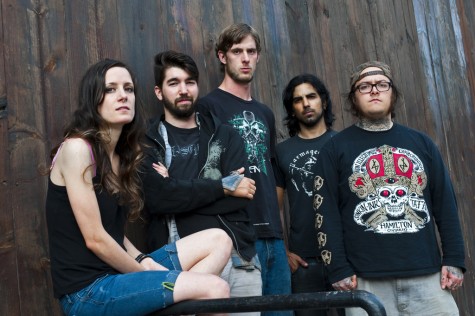 "Drift", the brand new video from Ottawa, Canada-based grindcore technicians FUCK THE FACTS, can be seen below. The imaginative, creepy clip for the scathing opening track from FTF's eighth LP "Die Miserable" was created by David Hall of Handshake Inc., who has previously worked with TODAY IS THE DAY, BRUTAL TRUTH, HAIL OF BULLETS, JUCIFER, BASTARD NOISE, AGORAPHOBIC NOSEBLEED, SIGH and RWAKE.

Following its month-long European tour which wrapped up in early April, FUCK THE FACTS is set to storm its native country on the "Canadian Ritual Tour 2012". Beginning late next week, the trek will invade twenty cities across Canada and the upper U.S. Detroit crushers THE BLACK DAHLIA MURDER will headline the run, with support from FUCK THE FACTS and their Relapse labelmates, Cali gore kings EXHUMED — with FTF headlining several additional dates along the route.

"Die Miserable" was released in North America last October via Relapse Records. Recorded between tours at the group's own studio, the CD features over 35 minutes of FUCK THE FACTS' scorching blend of socio-politically-charged grind, hardcore and metal fans worldwide have embraced for the past decade.