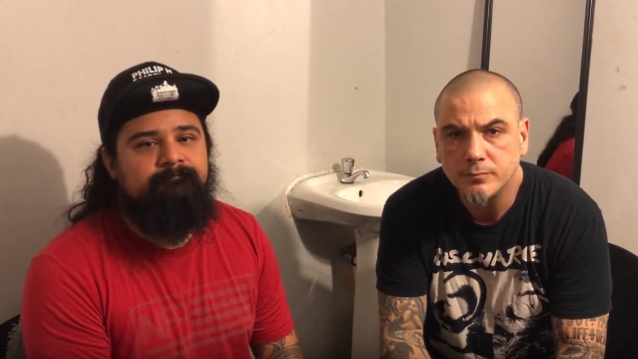 Philip Anselmo has paid tribute to RIGOR MORTIS and WARBEAST vocalist Bruce Corbitt, who died on Friday (January 25) after a battle with esophageal cancer. He was 56 years old.

The former PANTERA singer commented on Corbitt's passing via a video message recorded before PHILIP H. ANSELMO & THE ILLEGALS' concert in Santiago, Chile. Also appearing in the video is THE ILLEGALS drummer José "Blue" Manuel Gonzalez, who was previously a member of WARBEAST.

Anselmo said: "I have so much I can possibly say about Bruce, and I will eventually. But for right now, all I can say is I send my love to his wife, his daughter, his mother and everybody that was close to him. The guys in WARBEAST, the guys in RIGOR MORTIS, all the DFW [Dallas-Fort Worth] fans, I love you so much, and I know Bruce loved you so much. I wouldn't even know Blue if it weren't for Bruce. And there's a lot to sort through and a lot to deal with. Over the next few days, just find it in your heart to think about Bruce and his family and his music and his impact on heavy metal and music in general. And that's really all I can say right now. We love you."

All three of WARBEAST's albums were released through Anselmo's label, Housecore Records. He was even the best man at Corbitt's wedding when Bruce and Jeanna Corbitt were married in 2012.

"I've seen his world crash down around him when he was young," Anselmo told Billboard. "I've always felt there is no fucking way I could let him down as a friend and business partner. "Bruce is my big brother, and that's how we roll. His family is my family, and vice versa, yet again."

"In retirement, know this: You made a dent in this crazy biz, and yes, your contribution to the long line of great metal vocalists is valid as it comes," Anselmo said about his friend and colleague shortly before the concert.

RIGOR MORTIS is considered one of the most influential thrash metal bands to come out of North Texas.

Corbitt formed WARBEAST in 2006 with Rick Perry and Scott Shelby, both of whom played guitar in GAMMACIDE.