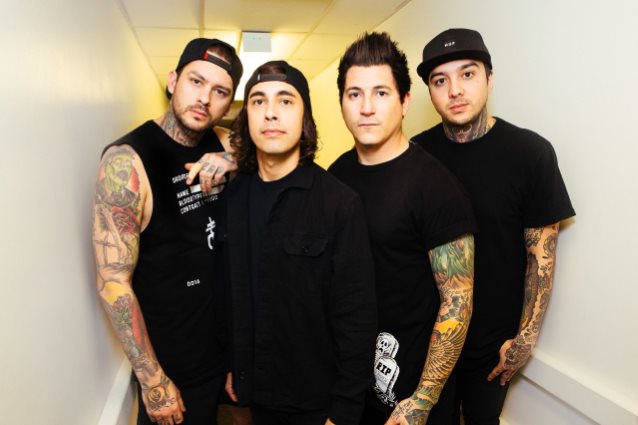 Coming off the success of the band's recent tour with RISE AGAINST, PIERCE THE VEIL has debuted the video for its new single, "Today I Saw The Whole World". Directed by Dan Fusselman (NECK DEEP, SILVERSUN PICKUPS, AUGUST BURNS RED),the clip complements the track's high-energy dynamic with a fiery compilation of live performances by the San Diego rock group.

"I grew up watching massive amounts of MTV music videos throughout the '90s," recalls lead PIERCE THE VEIL singer/songwriter Vic Fuentes. "I would record all of my favorites on VHS tape, watching them over and over until the tape wore out.

"Our new video was inspired by some of these artists that I loved back then like the BEASTIE BOYS, CYPRESS HILL and MARILYN MANSON. We wanted to use this '90s look to visually express the lyrics and fury inside of the song."

"Today I Saw The Whole World" is taken from PIERCE THE VEIL's latest album, "Misadventures", which debuted at No. 4 on the Billboard Top 200 chart. Lyrically, the disc is a flood of emotions, recently revealed truths and reflections of new realities — the suicide of a past love, the Paris terror attacks, the online intimidation of a girlfriend by crazed fans, self-worth and an individual's ability to shine, and the challenge of a cunning betrayal.