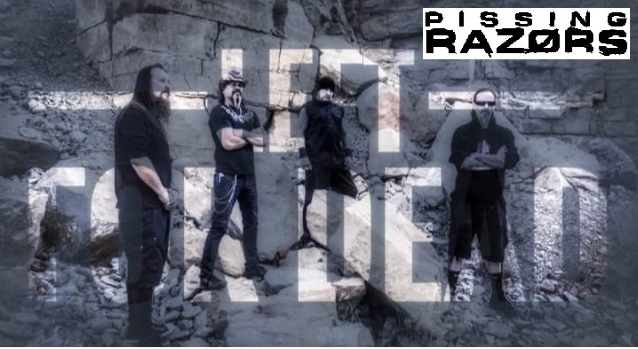 Texas metal outfit PISSING RAZORS has released its latest single and accompanying video, "Left For Dead". The track was mixed and mastered by Chris Collier (PRONG, KORN, WHITESNAKE) and is available on all digital platforms worldwide via Razor Records. The group is also currently putting finishing touches on its seventh full-length effort, "Eulogy Death March", tentatively set for release in early 2020.

The first single from the new disc, "Crushing Grip", was released in January.

PISSING RAZORS was formed by the Garcia brothers (Eddy and Danny) in the early '90s under the moniker BACK DOOR CYCLOPS, but changed its name to PISSING RAZORS in time for the release of the band's debut studio album, "Psycho Punko Metal Groove", in 1996. The CD was followed by "Pissing Razors", "Cast Down The Plague", "Fields Of Disbelief" (2000),"Where We Come From" (2001),the live record "Live In The Devil's Triangle" (2002) and the group's latest release, "Evolution", in 2003.