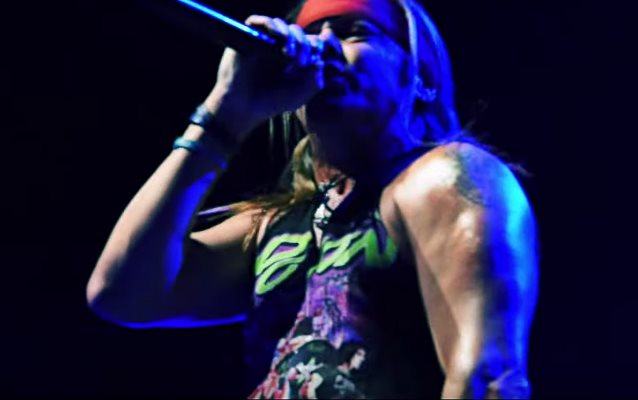 Says POISON: "We love our loyal fans and wanted to take the time to say THANK YOU for coming to support us on tour this year! We had the best time and loved seeing you all again.

"In celebration of the tour, we asked fans to send in their #NothinButAGoodTime photos, and vote on their favorites to make it into our video. The top 100 fan-voted photos were included here — plus three bonus photos! It was truly #NothinButAGoodTime"

In an interview with the "Drummer Nation" show, POISON drummer Rikki Rockett spoke about what it has been like reuniting with his bandmates for the trek. "It's been a lot of fun so far," he said. "It's kind of crazy. I mean, I was out there with [my side project] DEVIL CITY ANGELS, doing stuff, but not POISON. We had a few corporate gigs here and there, but not a full-blown tour."

He continued: "It felt great [getting back up on stage with the guys]. I mean, after the first two days, I felt at home. The first day, I was, like, 'Woah! Can I do this?' And now, I get up on stage and it's like home, you know what I mean? It really is. A lot of people say, 'Oh, another day at the office at the drum kit.' It's, like, no — another day at home."

POISON appeared at the 2013 Indy 500 Miller Lite Carb Day, but had otherwise been mostly playing private shows, including one in January 2015.

The band hadn't done any major touring since taking part in the 2012 "Rock Of Ages" trek with DEF LEPPARD and LITA FORD.