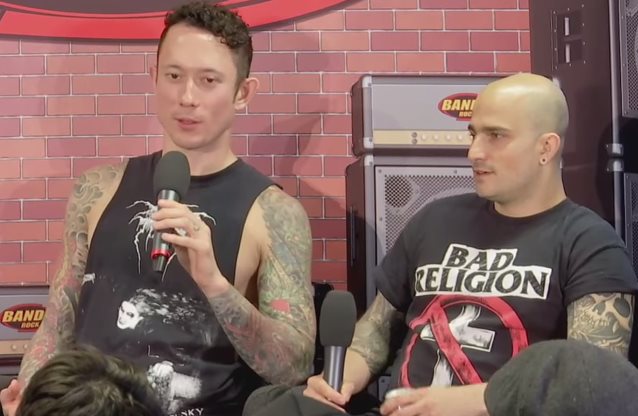 TRIVIUM: 'The Sin And The Sentence' Is 'The Perfect Culmination Of What We've Been Doing Throughout The Years'

Asked about the production process for TRIVIUM's new album, "The Sin And The Sentence", which will be released on October 20 via Roadrunner, Paolo said: "It has been about a year and a half, almost two years since we started really working on it, so we were kind of working on it on the down load while we were touring. We really came together and made it November of last year when we got Alex [Bent, drums] into the band. We kind of threw him into the deep end, because we were, like, 'You've gotta learn an entire headlining set — and we're gonna start writing new music.' So we kind of rolled the dice with that one, but Alex ended up really stepping up — he really crushed it.

"I guess we just really wanted to make the 'most TRIVIUM' TRIVIUM album we could make — the culmination of everything we've been writing," he continued. "And it really just kind of came down to us being in our rehearsal room and just working together and not letting anyone outside of Matt, Corey [Beaulieu, guitar/vocals] and myself into the process. And then, of course, Alex. But no one else — we didn't send any demos to anyone. We were kind of telling the label, 'Oh, yeah, we're ready to record.' And I remember our A&R dude was, likem 'I've gotta hear something.' So we flew him down [to Florida]. But we didn't send demos out to anyone, and I think by retaining all the music for ourselves, it was the perfect culmination of what we've been doing throughout the years."

Added Heafy: "It seems like everyone was really shocked when all of a sudden a new video came out.

"What was really great, and what TRIVIUM always does is we're always reactionary — we look at what we've done [and] we look at what all bands are doing," he said. "We've been noticing definitely — and we did this on 'Vengeance Falls' [2013], so we're guilty as well — bands just posting on their own social-media accounts, 'You'll never believe what's coming from the studio recording. Here's a picture of a beer bottle in my shoe in the studio, and this is cool.' And we didn't wanna do that, because everyone else was doing that. So what we did instead was we decided that we'd completely finish the record, finish the videos — there's documentary stuff coming, there's all sorts of things coming still — record everything, control it, make our own schedule where everything could be released. 'Cause if you think about a movie, you don't see behind-the-scenes pictures from the director first — you see a trailer first, and then things start to come from there. So that's what our idea was with 'The Sin And The Sentence' — release the trailer first, which was the first song, and everything from there."

Regarding what the biggest difference is between the way TRIVIUM approaches songwriting today compared to how it was for an album like 2005's "Ascendancy", Paolo said: "I think we've learned how to bridge our melodic side and our heavy side a lot better. Obviously, we're probably the only people that have heard the entire [new] record, but to explain it to people, the heaviest moments of the record don't feel like we're a different band from a song like 'The Heart From Your Hate' — it feels like a complete thought. Matt being able to sing and scream opens up so many opportunities, so we have to really find a way to balance that — not go too far one way or the other; it's always about balancing those two worlds. Some of the heaviest stuff, like [the song] 'Other Worlds', you're, like, 'Wow, this is a really heavy song,' but you notice there's really no screaming, only little background parts; we didn't have to do screaming to make the song really intense. So I feel like we've come a long way as writers and we really understand what we can do and what TRIVIUM is about, and it makes writing songs a lot easier. In the past, we'd have a song like 'Dying In Your Arms' and then you'd have a song like 'Ascendancy', and now we're able to balance everything out all at once."

"The Sin And The Sentence" is available for pre-order at all DSPs, with all pre-orders receiving instant grat downloads of the album's title track and "The Heart From Your Hate".

TRIVIUM will make its return to North America this fall on a co-headline tour with ARCH ENEMY featuring support from WHILE SHE SLEEPS and FIT FOR AN AUTOPSY. The tour will kick off on October 27 in Orlando, Florida and make its way across the U.S. and Canada before finishing on December 6 in Houston, Texas.

"The Sin And The Sentence" track listing: