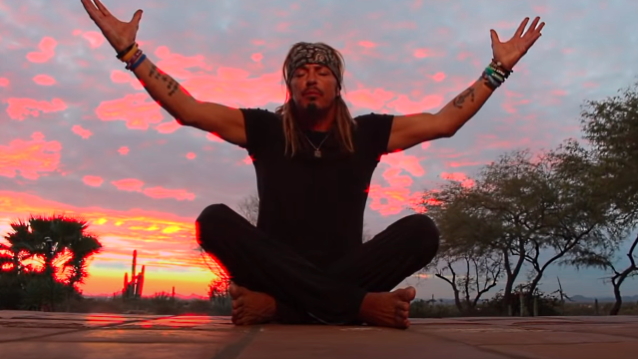 In a brand new interview with the Pittsburgh Current magazine, POISON singer Bret Michaels said that his realistic mindset and an optimistic attitude have been incredibly helpful in terms of him processing his feelings and the health challenges he's had to face over the last decade.

"The main thing that you have to have, the thing that supersedes everything else, is willpower," Michaels said. "I'm not going to lie to you, it's almost like a placebo. I may have gotten the pill that did nothing, but my willpower made me believe I was going to get better and oddly enough I did.

"I go as long as I can for as much quality as I can," he added. "And I want to be clear, it's not easy. I don't want people to think, 'oh la-dee-da, I've got cancer, I've got diabetes, it's no big deal.' It's a very big deal, but the secret is, you take that card you've been dealt and you deal with it but you don't let it supersede the quality time you have left. Find what rocks your world and do it for as long as you can."

In 2009, Michaels was injured while performing on the Tony Awards. The following year, he had a brain hemorrhage and also underwent an emergency appendectomy. In 2014, Michaels had kidney surgery. This past January, Bret underwent two separate surgeries — one to repair a torn rotator cuff and another to have a patch of skin cancer removed.

The 57-year-old rocker, who is a father to two daughters, is a lifelong Type 1 juvenile diabetic who continues to raise funds and awareness for not only diabetic causes, but St. Jude Children's Hospital, PetSmart charities and more.

This summer, POISON is scheduled to embark on "The Stadium Tour" with MÖTLEY CRÜE, DEF LEPPARD and JOAN JETT & THE BLACKHEARTS.