POISON singer Bret Michaels says that he is excited about the band's upcoming "The Stadium Tour" with MÖTLEY CRÜE, DEF LEPPARD and JOAN JETT & THE BLACKHEARTS.

"I've been working on that for years, hoping we could put it together with everybody and it just worked," he told People.com. "It will be an absolute, all-out high-energy party. I think people are excited for a live, good time summer party with great music."

"The Stadium Tour" will kick off on June 21 in San Antonio, Texas and will include newly announced gigs in Kansas City, St. Louis, Minneapolis, Nashville, Cincinnati and Cleveland. The trek marks CRÜE's first live dates since wrapping its 2014/2015 farewell tour. The band toured with POISON back in 2011 and DEF LEPPARD teamed up with POISON for a string of road dates in 2017 — but the upcoming jaunt marks the first time all four acts have hit the road together for an extended tour.

Produced by Live Nation, "The Stadium Tour" was announced on December 4 at SiriusXM's Hollywood Studios live on the Volume Channel 106. The trek reportedly sold more than 700,000 tickets and grossed over $90 million at the box office in the first weekend of sales. The tour saw the fastest sellout in Miller Park history in Milwaukee, according to a press release. Additional shows sold out instantly in Atlanta, Seattle, Charlotte, Dallas, Pittsburgh, Detroit, Chicago and Denver.

POISON's 2012 tour, a co-headlining outing with DEF LEPPARD, grossed $14.1 million, according to Pollstar. 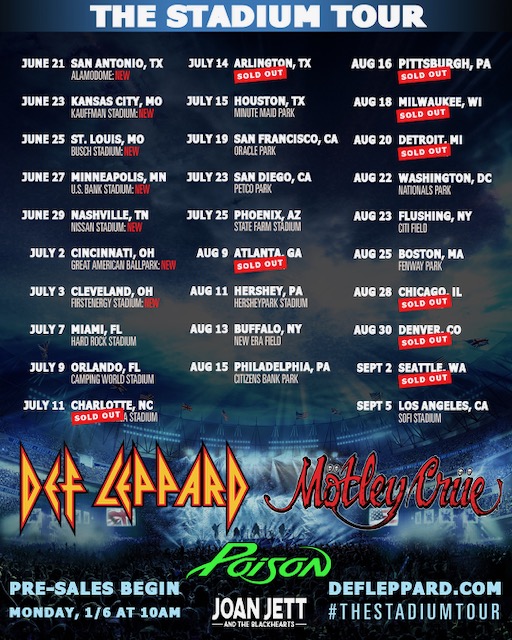