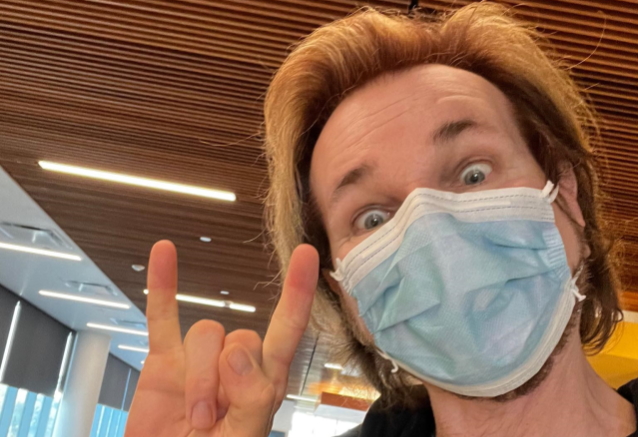 POISON drummer Rikki Rockett says that he is still cancer free, nearly seven years after he was diagnosed with oral cancer.

Rockett offered an update on his health status via his social media on Thursday (May 19). He shared a photo of him in front of Moores Cancer Center at UC San Diego Health, and he included the following message: "I love being negative! Time to do a tour!!! #nocancer #moorescancercenter".

In June 2015, Rikki visited his primary care doctor with a sore throat. His doctor found a small tumor at the base of his tongue, and Rikki learned he had human papillomavirus (HPV)-related oral cancer. He endured nine rounds of chemotherapy and 37 sessions of radiation therapy. The tumor initially responded, but returned three months later, spreading to his lymph nodes. Rikki then saw Dr. Ezra Cohen at UCSD Moores Cancer Center, who helped him enroll in a clinical trial of pembrolizumab (Keytruda). Rikki's tumor responded immediately. Just over two months into the trial, a scan revealed that his tumor had shrunk over 90 precent.

In 2020, Rockett told "Trunk Nation" that he was afflicted with the same type of cancer as what IRON MAIDEN's Bruce Dickinson and MEGADETH's Dave Mustaine had.

"It was base of tongue with an associated lymph node, which is pretty common as far as head and neck cancers these days," he said. "HPV-related head and neck cancers usually are base of tongue. There's a few people that I've sort of mentored or helped out, and many of 'em are musicians. And HPV is pretty rampant — it really is. If you have a kid, get 'em inoculated."

Asked what his symptoms were, Rikki said: "I had a sore throat that wouldn't go away. That was the main thing. And then I had a lymph node that was kind of sticking out. First, they tried antibiotics, and they didn't work at all — they didn't even touch it. So it was, like, 'Okay, we need to do a biopsy. We're gonna go down and scope and take a look.' And there was a lump down there. Then, after a few weeks, it started to get hard to swallow, 'cause the lump was getting bigger — the tumor was getting bigger. So I went and did the typical treatment for it, which is chemo and radiation, and it did not work. And by the way, it's a fairly curable cancer, especially with HPV — there's a high percentage rate of success with it, of cure. But in my case, it didn't cure, so my options were a whole lot less. My doctor told me recently — he didn't tell me this before — but he told me recently that I had about a 10 percent chance if I would have went down the regular path. But we didn't — we used immunotherapy, and it put it in remission in about 10 weeks. When it works, it is amazing."

Rockett first revealed that his tongue cancer diagnosis was caused by HPV — the most common sexually transmitted infection — in a 2015 interview. He said: "It is the number one leading cause of oral cancer these days. There's less and less of the truck drivers that chew tobacco for thirty years getting it, because people are more aware that that kind of stuff isn't good. So we are getting marathon runners and all these elite athletes with this. I have a friend that's a therapist, and five years ago, it was five percent of the people she treated, and now it's close to ninety percent."

He continued: "It can be spread sexually, but now they're saying that it can spread [through] deep-kissing and actually hand to mouth. I mean, if you see the Olympic swimmers, they swim and they smack their hand on the side of the pool for each lap, and their hands are full of warts and stuff from HPV. Now the wart kind of HPV is not the same as the strain that causes cancer, but it is spread almost identically. For men, you can't tell if you have it. For women, you can get a papsmear. But the doctor estimated probably it was 15 [or] 20 years ago [when I contracted it], and my body probably got rid of it, but it mutated itself and my body would probably see that again and get rid of it. But there's no way to tell who got it. I mean, I know a couple that's been married for 15 years and they've never cheated on each other, and they're pointing their finger at each other [after one of them was diagnosed with oral cancer], and it turned into a thing until the doctor sat 'em down and went, 'Look, you can get this so many ways.'"

POISON is set to launch "The Stadium Tour" with DEF LEPPARD, MÖTLEY CRÜE and JOAN JETT & THE BLACKHEARTS on June 16 in Atlanta, Georgia. The 36-date trek, which is due to wrap September 9 in Las Vegas, was originally scheduled to take place in the summer of 2020 but ended up being pushed back to 2021, and then to 2022, due to the coronavirus crisis.

I love being negative!
Time to do a tour!!!