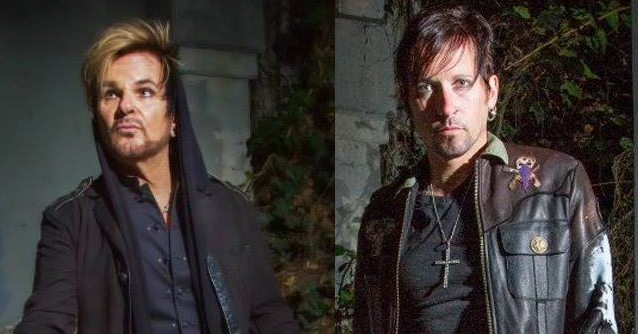 DEVIL CITY ANGELS, the band featuring drummer Rikki Rockett (POISON) and vocalist Brandon Gibbs, has released a new single, "Testify". The official music video for the track can be seen below.

DEVIL CITY ANGELS was originally formed by Rockett, Gibbs, guitarist Tracii Guns (L.A GUNS) and bassist Eric Brittingham (CINDERELLA). The band released its self-titled debut album in September 2015. Following the recording of "Devil City Angels", Brittingham decided not to continue with the project and his spot was taken by Rudy Sarzo (QUIET RIOT, OZZY OSBOURNE, WHITESNAKE). Around a year later, Rockett, Gibbs and Brittingham joined forces with guitarist Joel Kosche (ex-COLLECTIVE SOUL) to form the LORDS OF DEVIL CITY. Within a few months, Rockett, Gibbs and Brittingham relaunched DEVIL CITY ANGELS, only for Eric to exit the project in the summer of 2017 and be replaced by Topher Nelson.

"Five or six years ago, I started a band with Tracii Guns called DEVIL CITY ANGELS," Rockett said. "We added a singer named Brandon Gibbs, and Eric Brittingham who had been a long-time friend. We made a record, we did a small tour. We started to get some pretty good traction. We had some problems with management, we brought Rudy Sarzo in for a short time; then I got sick.

"We all had to do what we had to do," he continued. "Tracii went back to L.A. GUNS, Eric is with Bret [Michaels], Rudy's doing a bunch of his stuff. That left Brandon and I. After I got better, we got Joel Kosche from COLLECTIVE SOUL. We put together this song, recorded it virtually. Topher Nolan played bass on it. We grabbed the club for a couple of hours and did a video; we just never released the song. With all this lockdown, we couldn't think of a better time to put it out. We hope you love it as much as we loved doing it."

A little over year ago, Gibbs and Rockett were embroiled in a public war of words after Gibbs indicated he was no longer involved with DEVIL CITY ANGELS due to the fact that the band was "inactive." Rikki responded that DEVIL CITY ANGELS "went inactive" because he was diagnosed with cancer and suggested possibly moving on without Brandon. This prompted Gibbs to fire back that he had "never seen someone complain about money, perception and 1st class tickets" as much as Rockett allegedly did, "to the point where it gets in the way of doing anything." The two appear to have since resolved their differences.

Back in 2015, Rockett told Sleaze Roxx about Gibbs: "The thing about Brandon is that he's a young guy but he sounds like he's from the '70s. That's what is so appealing for guys like us. That's the reason that I really wanted Brandon involved with us. Brandon doesn't have any baggage, which is good and he has a lot of experience. He's got a great pedigree."

More than five years ago, Rockett and Gibbs joined forces with Rikki's POISON bandmates Bobby Dall (bass) and C.C. DeVille (guitar) to play several shows as THE SPECIAL GUESTS in what was widely perceived as a not-so-subtle message to POISON singer Bret Michaels that they weren't willing to remain completely inactive while he pursued a solo career.

The Devil’s are back! Enjoy the new DCA video! We had a blast making it for you! Also, a very special shout out to our manager James Lucente for helping DCA shift gears and get our single out and @fredcoury for… https://t.co/PcgwYlO2IV