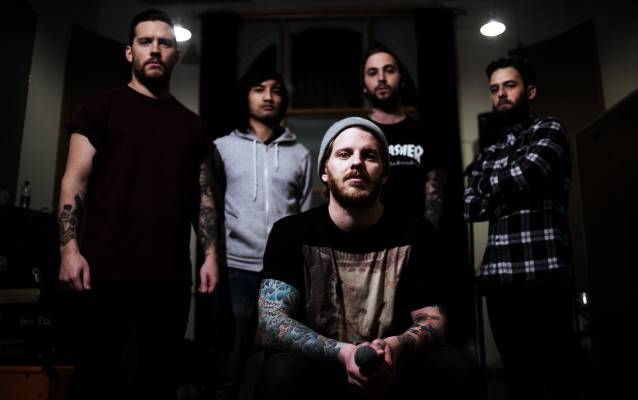 The band commented: "Stoked to announce In At The Deep End Records will be working with Prosthetic on the North American release of 'Shadowed By Vultures'.

"Tackling the U.S. head-on has been a dream for the band since day one and we're over the moon to be doing so in such capable hands. We can't wait to get over to our existing fans across the Atlantic and are buzzing to make many, many more."

POLAR quickly made a name for themselves as one of the U.K.'s most exciting live bands following their formation in 2009 as they supported acts including GALLOWS, TRASH TALK, THIS IS HELL, FEED THE RHINO and TRC, leaving countless fans awestruck and even instigating one of the largest and most destructive circle pits at Hevy Festival 2011. In February of that same year, the band released their critically-acclaimed debut EP, "This Polar Noise", which received airplay from BBC Radio 1 and Kerrang! Radio, including a No. 1 single on U.K.'s Scuzz chart. Shortly after, POLAR returned to release their full-length debut, "Iron Lungs", which Metal Hammer described as "taking the rabid cacophony of CONVERGE, COMEBACK KID's rousing melodic hardcore and the snarling spirit of punk." In May of 2012, the band teamed up with Oli Sykes' (BRING ME THE HORIZON) clothing label Drop Dead to release a new EP, "Inspire Create Destroy". No longer the scrappy hardcore-punk band from Surrey, the band had matured to draw influences from all corners of the heavy/alternative music world. A heightened sense of melody and rhythm enabled POLAR to take a dramatic turn to the band's future which saw them tour with FUNERAL FOR A FRIEND, WHILE SHE SLEEPS, YOUNG GUNS and DEFEATER.

POLAR will kickstart 2014 by heading out with HUNDREDTH, BEING AS AN OCEAN and COUNTERPARTS throughout Europe, a trek which will be immediately followed by a headlining tour throughout the U.K. with support from ANAVAE, THE CATHARSIS and ZOAX.