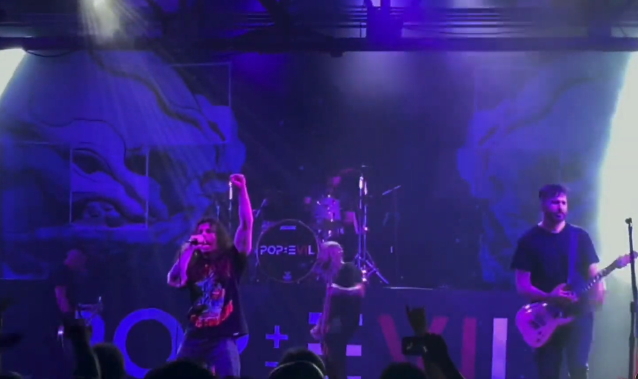 POP EVIL performed a cover version of the METALLICA classic "For Whom The Bell Tolls" on July 29 at Warehouse Live in Houston, Texas. Joining POP EVIL on stage to handle lead vocals on the track was Justin Benlolo from support act BRKN LOVE. Fan-filmed video footage is available below.

Last month, POP EVIL's longtime bassist Matt DiRito announced his exit from the band, saying in a statement that "the details surrounding my departure are only known by a few people, and respectfully it will remain that way."

POP EVIL drummer Hayley Cramer was forced to miss the first couple of weeks of the band's U.S. tour because of COVID-19 travel restrictions. She has since flown to the U.S. and joined her bandmates on the road.

POP EVIL's "Versatile" tour kicked off on July 14 with an outdoor show in Lake County, Illinois and will run across the U.S. until September 23 including stops at several of the major rock festivals — Rocklahoma, Aftershock and Inkcarceration — as well as supporting SHINEDOWN. Support on the trek comes from special guests ZERO 9:36, BRKN LOVE and LIKE MACHINES (on select dates).