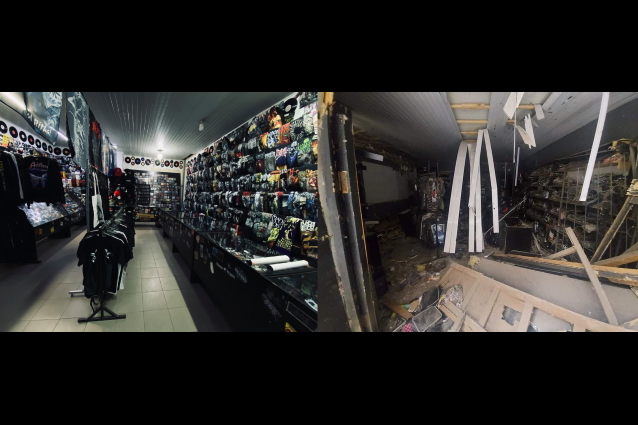 Kolovorot, the cult Ukrainian underground heavy metal merchandise shop which is situated in historical part of Kharkiv, the country's second-largest city, was heavily damaged during a barrage of Russian air and rocket attacks earlier this week.

On Friday (March 4),the organizers of Ukraine's Metal East Nove Kolo heavy metal festival uploaded photos of the destruction at the store and included the following message: "Here is Kolovorot shop in Kharkiv. The cult Ukrainian place of underground merch, the place from which Metal East: Nove Kolo is mostly organized. It is the very small part of the results of Russian invasion in Ukraine.

"We are all in Ukraine now. We continue to fight for our land.

"We ask bands which have played at our festival, bands with which we have cooperated via Musical Hall/Kolovorot, all the customers and fans to spread the word and to help stop war in Ukraine.

"We will definitely win. And then we will see you all at Metal East: Nove Kolo and in the renewed Kolovorot."

According to CNN, Russian forces have targeted residential areas in Kharkiv, a city of about 1.5 million people, hitting civilian infrastructure such as schools, shops, hospitals, apartment blocks and churches. The city's Freedom Square, the center of public life in Kharkiv, was hit with was believed to be a cruise missile, an adviser to Ukraine's interior minister said.

Kharkiv, a predominantly Russian-speaking city, has been under attack since the start of the Russian invasion on February 24.

But despite heavy shelling and its proximity to the Russian border, Kharkiv is still under Ukrainian control.

In the nine days since the invasion began, more than one million people have fled Ukraine for neighboring countries, according to the U.N.

On March 2, the United Nations General Assembly overwhelmingly denounced Russia's military invasion of Ukraine and demanded the Kremlin immediately cease its military offensive and "immediately, completely, and unconditionally withdraw all its military forces from the territory of Ukraine." In addition, dozens of countries referred Moscow to be probed for potential war crimes.

Putin's military aggression — which has been described by U.S. president Joe Biden as an "unprovoked and unjustified attack" on Ukraine — has resulted in at least 225 deaths and 575 civilians injured, a United Nations agency said on Tuesday.

Here is Kolovorot shop in Kharkiv. The cult Ukrainian place of underground merch, the place from which Metal East: Нове...

Posted by Kolovorot Shop on Wednesday, May 5, 2021