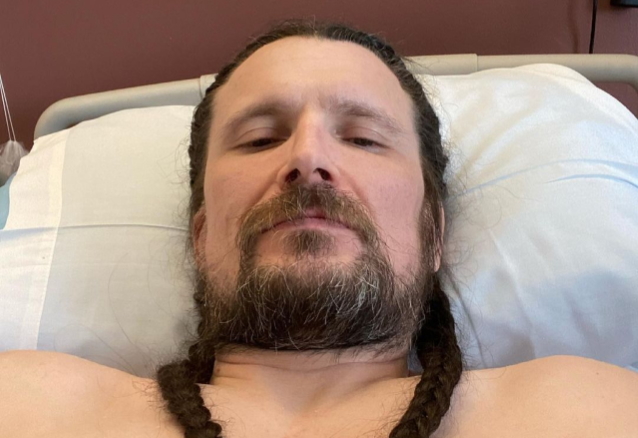 The 52-year-old revealed his latest health battle in a Tumblr blog post on Wednesday (April 14). He wrote: "Week six after surgery. Had a skin flap reconstructive surgery which essentially is cutting out a large spot of flesh from my tailbone all the way down to the bone, grinding down the bone and removing all the dead bone. After that, a horseshoe shaped incision is cut all the way around my buttocks and filleted, then a slash up the side towards my back to allow the entire piece to pivot over to cover the wound. The entire thing is then stitched together from the inside, again stitched mid flesh, and stapled together all the way around.

"Special thanks to my plastic surgeon Dr Charles P Virden MD Reno Nevada (much# respect). This surgery may have just saved my life. #drcharlespvirdenmd #jeffbecerra"

POSSESSED originally split in 1987, leaving behind a short but highly influential legacy, most notably their 1985 "Seven Churches" debut, widely considered to be the first-ever death metal album. Internal tensions after the release of 1987's "The Eyes Of Horror" EP led to the band's dissolution, with guitarist Larry Lalonde joining Bay Area tech-thrashers BLIND ILLUSION, then PRIMUS, while vocalist/bassist Becerra, guitarist Mike Torrao and drummer Mike Sus each going separate directions.

Two years after POSSESSED's split, Becerra was the victim of a failed armed robbery attempt, subsequently leaving him paralyzed from the chest down and sending him into a spiral of drug and alcohol abuse. POSSESSED was reactivated by Torrao in 1990 with a completely different lineup, but only released two demos before dissolving in 1993. Becerra then reformed POSSESSED in 2007 with his own lineup, which released its first studio album in 33 years, "Revelations Of Oblivion", in May 2019.