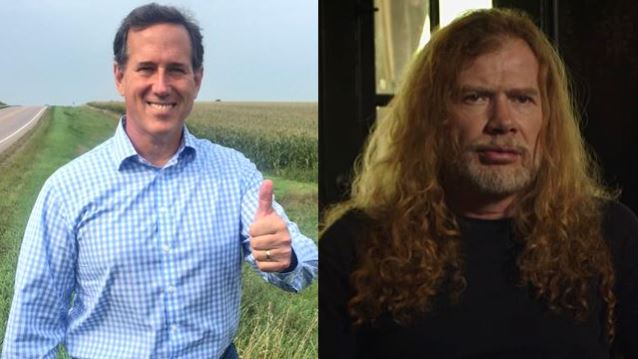 Rick Santorum, the former senator from Pennsylvania, says that he accepts the "endorsement" of MEGADETH leader Dave Mustaine in his bid for the 2016 Republican presidential nomination.

Santorum, who is known for his anti-abortion extremism and his equally extreme views on immigration, has in the past argued that women were ill-suited to combat because of "emotions that are involved," said the NBA was corrupting American culture, and declared that consensual sex between gay people should be illegal.

During an appearance at the Sharpshooters shooting range in Greenville, South Carolina, Santorum was asked by Cinco Sanders if he embraced or denounced Mustaine's "endorsement" of him in the 2016 presidential race. He responded (see video below): "One of the things I learned a long time ago is that anybody that wants to support my campaign is free to do so. I used to say this a long time ago... When I started getting involved in politics, I would ask people why they were voting for me, and after doing that a few times, I stopped, because I realized you really don't wanna know. Sometimes people have the most interesting reasons why they support you. So [what you do now] is say thank you very much and you move on."

Pressed on whether he accepted the MEGADETH mainman's "endorsement," Santorum said: "I accept the endorsement."

In a 2013 interview with Revolver magazine, Mustaine denied having any party affiliation despite having made earlier statements that suggested the contrary. He said: "People think I'm a Republican. I'm not a Republican. I'm just a grownup who loves my kids and loves my country. The point is, why does that make me have any kind of political persuasion?"

He continued: "Somebody said something in an interview the other day: 'So why'd you endorse Mitt Romney?' And I went, 'What did you say?'

"The press said I endorsed Rick Santorum. [But I] never did. [I] talked to Rick on the phone and I said, 'Look, bro, I think it's kind of cool that you left the campaign to take care of your sick daughter.' That's what I said."

Mustaine added: "I don't align myself with any political party, because I'm a musician. If I have something to say, I'll sing about it. I don't talk about it much in the press."

In April 2012, Santorum announced he would end his first quest for the White House after his then-3-year-old daughter, Bella, had fallen sick again and was in the hospital.