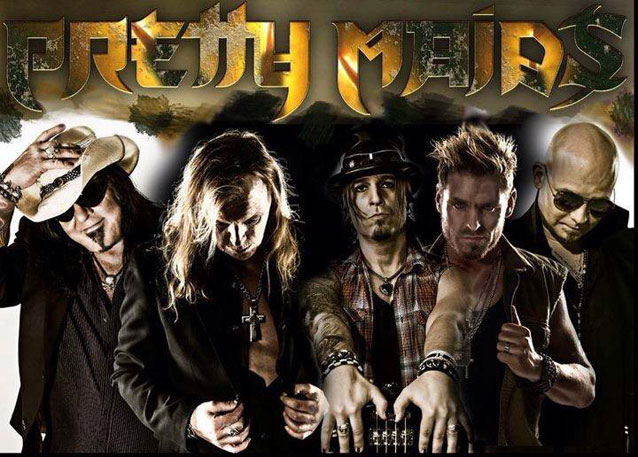 Danish hard rockers PRETTY MAIDS are recording a new album for a spring 2014 release. The effort will consist of re-recorded songs from the era between 1995 and 2006. The band states: "The reason for doing this project is to give those songs a different spin with the band and producer we have now. It is an in-between album until the band completes the next studio album with new tunes. This album will ALSO consist of brand new songs and a bonus DVD."

PRETTY MAIDS' latest album, "Motherland", was released on March 22 in Europe and March 26 in North America via Frontiers Records.

In late spring 2012, the band gathered to finally write the follow-up album. Singer Ronnie Atkins explained: "We knew it was going to be a tough one to follow. I remember back in the day when we had to follow-up albums like 'Future World', we tried more or less to copy the songs from the previous album to keep the same kind of balance. But this time we just wrote what came natural to us and that's what became 'Motherland'."

The band teamed up again with producer Jacob Hansen (VOLBEAT, AMARANTHE) for the new CD. Ronnie said: "Jacob was a natural choice since we had a great experience with him producing the 'Pandemonium' album. The recordings went smooth to begin with, but then we had to start touring again during the weekends and this created some stress. Though I really feel strongly about 'Motherland'. In my view, it has all the ingredients of a good PRETTY MAIDS album, maybe even more melodic than 'Pandemonium' and absolutely, as far as I'm concerned a worthy follow-up."