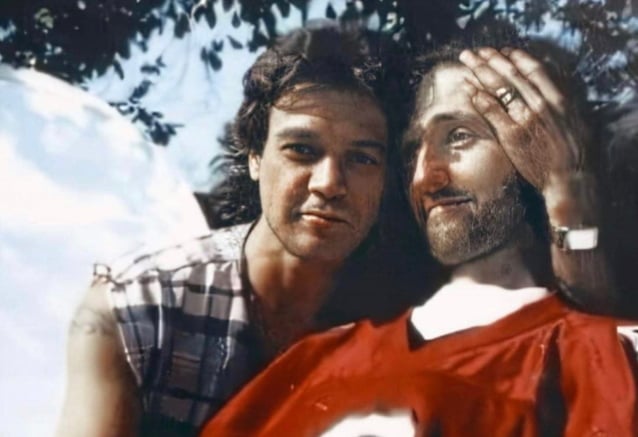 An amazing meeting took place on August 31, 1996. That's when Eddie Van Halen spent the day with a guy who had followed in his footsteps playing alongside David Lee Roth — Jason Becker. Jason had been diagnosed with ALS, or Lou Gehrig's Disease, and was not in good shape. Van Halen came to Jason's house to give love and support — as well as a guitar — to his friend and to film an ALS awareness promotional video. During that time, Eddie told stories, talked about his creative process, and played amazing music, instantly sounding exactly like Eddie Van Halen even when playing Jason's guitar through a small practice amp.

The never-before-seen footage below shows a side of Eddie Van Halen that goes far beyond his brilliant musicianship: a sweet, caring, generous personality, devoid of the trappings of fame or rock stardom. The video also documents the incredible strength of Jason Becker, who had been deprived of his shot at fame as well as his genius guitar skills, but still found the courage and the will to battle a debilitating disease.

"Eddie was such a beautiful person," says Becker. "He was incredibly kind to me and my family. Not only was he my biggest influence, he had such a huge heart. He honestly saved my life."

This video is a must-see piece of history, not just for guitarists but for everyone. It truly shows the magic of kindness, and a depth of emotion that we can all use more of.

Becker's story is one of brilliance, talent, determination, adversity, and, ultimately, triumph. A child prodigy on guitar, Jason rose to prominence as a teenager when he was one half of the technical guitar duo CACOPHONY, with his great friend Marty Friedman. In 1989, at only 19 years old and after wowing audiences all over the world, the young virtuoso became the guitarist for David Lee Roth, following in the huge footsteps of Eddie Van Halen and Steve Vai. He wrote and recorded on Roth's third solo album, "A Little Ain't Enough", and was poised for superstardom when a nagging pain in his leg was diagnosed as Motor Neurone Disease (MND),also known as Amyotrophic Lateral Sclerosis (ALS),or Lou Gehrig's Disease, the same condition Stephen Hawking lived with for over five decades. It is a fatal condition with a life expectancy of maybe five years. Maybe.

That was 30 years ago. He lost the ability to play guitar, walk, talk, and breathe on his own. But never lost his will to live or his desire to create music. Communicating through a series of eye movements with a system developed by his father, Jason spells out words as well as musical notes and chords. He imparts his musical vision to his team who then can input the notes into a computer, edit the parts to his exacting standards, and then generate charts for session musicians. His inspiring music and life story have been the subject of countless news articles and magazine cover stories.