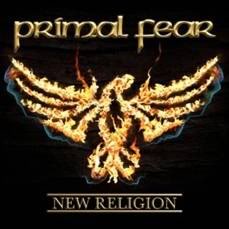 PRIMAL FEAR started the songwriting for their new CD in October 2006 and the recording began shortly later, at the House Of Music studio with engineer and co-producer Charlie Bauerfeind (BLIND GUARDIAN, SAXON, HAMMERFALL) and longtime producer and band member Mat Sinner.

"I really feel electrified," says Sinner. "I never had such a feeling since the release of the first PRIMAL FEAR album in 1998. We never worked harder on an album before," while singer Ralf Scheepers adds, "'New Religion' is definitely the start of a new chapter in the history of PRIMAL FEAR. The fact we've signed with a new record company and bringing back our good friend Henny Wolter into the band sets more energy free than the launch of a rocket. The band is in the best mood since many many years! Can't believe that? Listen to the album!"

The album proves once again that Randy Black is one of the world's top drummers and singer Ralf Scheepers delivers the most exciting and outstanding vocal performance of his career. Most of the guitars were played by Stefan Leibing. STARBREAKER and ALLAN/LANDE producer/guitarist Magnus Karlsson helped out with two stunning guitar solos prior to Henny Wolter rejoining the band and recording more lead and rhythm guitar for the CD.

EPICA's lead singer Simone Simons was invited to studio to sing the first duet in PRIMAL FEAR recording history, on the song "Everytime It Rains". The band worked on the mix at the Galaxy Studio in Belgium with award-winning engineer Ronald Prent (RAMMSTEIN, IRON MAIDEN, MANOWAR). Mat Sinner states: "We are totally satisfied about the result and the final sound. Ronald did a great job. In my view, 'New Religion' sounds more powerful than the predecessor, even you can hear every single tone crystal clear."

"The real metal songs like 'Sign Of Fear', 'Blood On Your Hands' and 'New Religion' are sounding 100% like PRIMAL FEAR, but still different" explains Mat Sinner. "I really love the vibe and that I feel a progress in our work, that there is still space for a new step into creativity. Even the fast, but very melodic tracks like 'Face The Emptiness' and 'The Curse Of Sharon' sounding fresh, new and exciting!"

Mat Sinner states: "We will start our tour in the U.S. this time and co-headline the ProgPower USA festival in Atlanta. For the first time, we will perform a bunch of songs from the new album on stage! Then we will embark on a double headliner tour together with our friends of U.D.O. through Europe, plus a yet undecided special guest. In December we will tour Japan and Korea, plus some more Xmas shows in Europe. Then we're working on dates in South America, the U.S. and Canada for early 2008!"

"New Religion" will be released in Europe on September 21. A U.S. release date has not yet been announced.