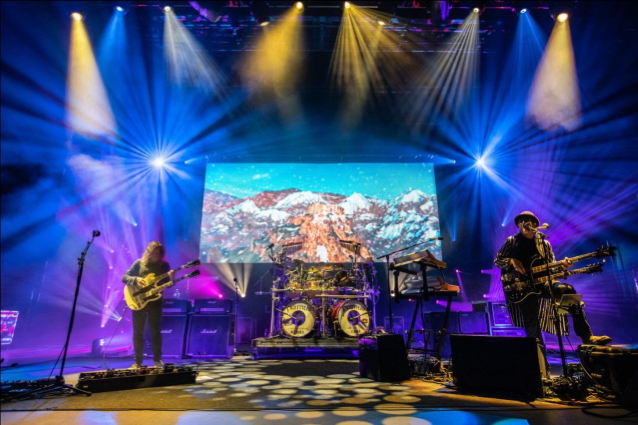 PRIMUS has unveiled a music video for "Follow The Fool", the final single off its new "Conspiranoid" EP. Their first new music in more than five years, the EP features several commentaries on what frontman Les Claypool described as "the mental state of the contemporary world," with "Follow The Fool" asking the pointed question — "who's the bigger fool? Is it the fool, or is the fool who follows the fool." A special vinyl release of the "Conspiranoid" EP is out now via ATO Records.

PRIMUS announced the "Conspiranoid" EP in April with the release of its epic, 11-minute opening track, "Conspiranoia". "I'd been itching to record an opus — basically a long, winding, bastard of a song, reminiscent of some of the compositions I cut my teeth (or ears) on, in my music-hungry adolescence," Claypool said. "'Conspiranoia' was sprouted from a seed I had planted in my notebook a year or so ago — a few lines commenting on the mental state of the contemporary world."

Claypool elaborated on the genesis for the single and its accompanying B-sides in an interview with Consequence. He said: "With our new studio in the works and some impending touring, we decided the world needed to be subjected to some new PRIMUS material. Not wanting, or even having the time for recording an entire album, the notion of a 'single' was tossed around. I'd been itching to record an opus — basically a long, winding, bastard of a song, reminiscent of some of the compositions I cut my teeth (or ears) on, in my music-hungry adolescence. I said to the fellas, 'Let's record a 20-minute song.' The end result was an 11-and-a-half minute, progressive hunk of sound called 'Conspiranoia'.

"'Conspiranoia' was sprouted from a seed I had planted in my notebook a year or so ago — a few lines commenting on the mental state of the contemporary world," he explained. "I watched the distrust and divide grow between friends, colleagues, relatives, and the general population because of the consumption and digesting of disinformation, misinformation, warped information, and flat-out fairy tales being perpetuated by anyone with a slight hint of web design aptitude. I was compelled to shed light on the ridiculousness of many of these perspectives and the lack of rational thought that was being applied in the interpretation of many such entities and theories.

"Because the single 'Conspiranoia' is of such length, I realized that for a B-side of the vinyl, we would need at least two tunes to fill out the real estate of the actual 12-inch disc," Les added. "I had the song 'Follow The Fool' in the chamber and we fleshed it out. [Guitarist] Larry Lalonde had the riff for the song that became 'Erin On The Side Of Caution', which I supplied the lyrics for by again pulling from my notebook of notions. Because all three songs were bred in an odd time of divide, confusion, angst, frustration, and social senility, the title 'Conspiranoid' seemed like an appropriate moniker for the EP."