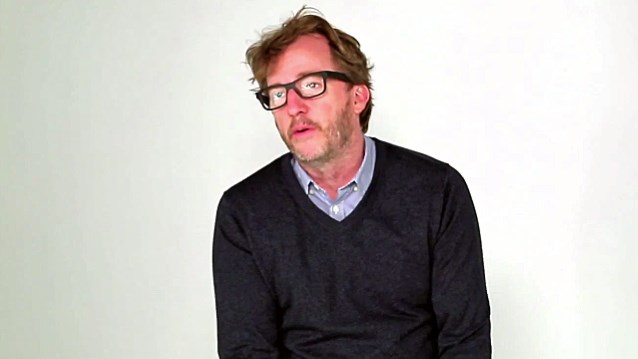 Producer Brendan O'Brien recently spoke to Ultimate Classic Rock about the making of AC/DC's new album, "Rock Or Bust". You can now watch the chat below.

On whether the recording process for "Rock Or Bust" went more quickly than that for 2008's "Black Ice":

Brendan: "I can't remember how long we spent on the last one, on 'Black Ice', but they seem remarkably similar as far as the amount of time. I'm told we spent less time… we got it done a little more quickly this time, but I think we did less songs, actually. So I think the last time we may have done… we may have had 15 or 16 songs we did… I could be wrong about that. But I think it was… They both went fairly smoothly. These guys work very hard; there's no slacking. They're very workmanlike. As far as when it comes to showing up at the studio, they're there on time every day, ready to go, so that kind of has a lot to do with it."

On his favorite song on "Rock Or Bust":

Brendan: "I think the first one we did was the song 'Rock The Blues [Away]', and it was just fun; it sounds like these guys. Both times I've worked with them, stuff was getting set up the first day, especially on 'Black Ice'. And they're out in the studio, and I'm out there with them, usually, but I'm in the control room at this point and kind of making sure it sounds the way it's supposed to sound, all that kind of stuff. And as I'm running something down, I'm kind of going, 'That sounds like AC/DC. That's kind of great. So we're halfway there.' So as soon as we kind of get that part of it going, the rest of it sort of seems to fall into place."