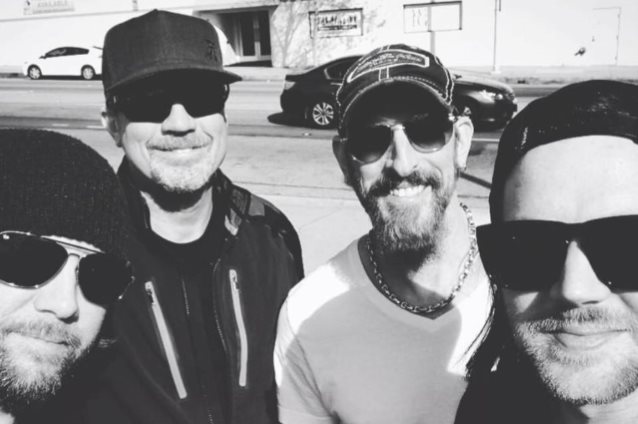 A teaser video for the new disc is available below.

PROJECTED's debut album, "Human", was released in September 2012 on Connolly's own Yaya Papu LLC label. At the time, Connolly stated about how the band came together: "The idea behind this project originally started as nothing more than a group of us who were friends already, going into the studio to just record some tunes we had laying around and basically just have a good time with it. No pressure from labels or any preconceived notions or expectations. Just making music and having a good time."

Added Phillips: "John, Vinny, Eric, and I have shared many miles and many stages together over previous years. We've always talked about collaborating and now it's finally come to fruition. I might possibly be one of the biggest SEVENDUST fans ever, and to get the opportunity to work with a few of my favorite musicians on the planet, and some of my best friends, means the world to me. We wholeheartedly believe in these songs...believe in John's vision... and couldn't be happier about the future of PROJECTED!"

Asked how difficult of a transition it is to be the frontman of PROJECTED, Connolly told Zoiks! Online in 2012 interview: "You know, it's hard to describe. I think the first thing that you go through is the acceptance that there's no one to hide behind. With SEVENDUST it's, like, let LJ [Witherspoon] do his thing and I'll duck in back there and stay out of the way a little bit. With PROJECTED, all of the sudden, it's, like, 'Wow, the sound of your voice is what is going to carry this whole deal.' Coming to terms with that is an interesting thing. First of all, you have the fact that you've never done it. Then throw in the fact that we're going to record at home, too. Let's do it in probably the worst environment we could possibly be doing it in. [Laughs] It's nice and convenient to be able to do it when you want to do it, but you have the UPS guy unloading stuff, you've got lawnmowers in the background, dogs barking, 'Just Dance 3' blending in a little bit. You throw all those things in the mix and you hang on and ask, is it doable? What do we have here that works? But yeah, it's tricky, it's a lot of different learning processes, but it's definitely a cool experience to actually step out and say where is my voice, what is my voice."