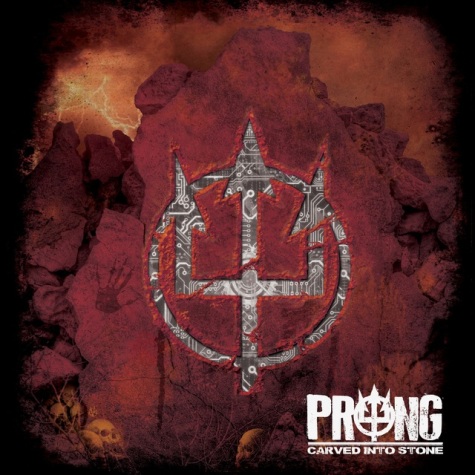 Heavy music innovators PRONG will release their new album, "Carved Into Stone", on April 24 in North America via Long Branch Records/SPV. The CD was recorded with producer Steve Evetts, who has previously worked with THE DILLINGER ESCAPE PLAN, SYMPHONY X, SEPULTURA and HATEBREED, among others. The cover artwork was created by Vance Kelly (DOWN, THE SWORD) and can be seen below.

Comments PRONG guitarist, vocalist and founder Tommy Victor: "It was hardest I've ever worked in the studio on any record I've ever been involved with."

PRONG — whose lineup is rounded out by bassist Tony Campos and drummer Alexei Rodriguez — has taken a major step forward in their constantly evolving brand of sonic schematics.

"I always believed there were many dimensions to PRONG," says Tommy. "Every record we've been associated with different scenes — hardcore, metal, industrial — even dance! I think this record brings all of that together and sounds very modern at the same time."

PRONG will be touring throughout 2012 in support of "Carved Into Stone". The initial dates have been confirmed, including two shows supporting Bay Area thrashers TESTAMENT in February, followed by a string of headlining gigs in March. More dates will be announced shortly.

Founded in 1986, PRONG is considered to be a pioneer of the American post-hardcore and post-metal scenes whose influence is still being felt today.

PRONG's last release was "Power Of The Damn Mixxxer", the remix counterpart to the band's 2007 album "Power of The Damager".