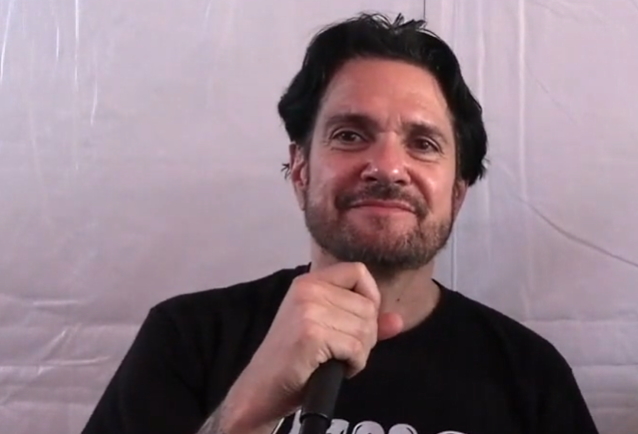 PRONG leader Tommy Victor has confirmed to Heavy New York that he and his bandmates are hard at work on the long-awaited follow-up to 2017's "Zero Days" album. "I can tell you the single will be out, the digital single, in January," he said at this past weekend's Aftershock festival in Sacramento, California (as transcribed by BLABBERMOUTH.NET). "'Cause the record is almost done. So for our European tour with LIFE OF AGONY in January, the single will be out. And the [full-length] record [will be out in], I guess, April or something. It depends on when the pressing plant can do it. It's on Steamhammer/SPV again, the same label. All the basic tracks are done. I've just gotta do vocals and solos now."

Speaking about his approach for the upcoming LP, which was produced by Steve Evetts, who previously helmed 2012's "Carved Into Stone" and 2014's "Ruining Lives", Tommy said: "This one is special because it's the first record I've written since I moved back to New York, [to] Amityville. So that concept is there, where it's, like, you know what? This is where the early PRONG stuff was written. I wrote it in my apartment in Amityville, and it's killer. So that's the concept, is that it's written back where I'm from. It's very hardcore, it's really heavy, but PRONG has to have the hooks, so it's still in there too. There's a lot of good choruses and understandable lyrics."

PRONG's latest release was an EP titled"Age Of Defiance", which came out in November 2019 via SPV/Steamhammer. The effort, which was produced by Chris Collier, included two new studio songs, the title cut and "End Of Sanity", along with live recordings of three tracks: "Rude Awakening", "Cut-Rate" and "Another Worldly Device".