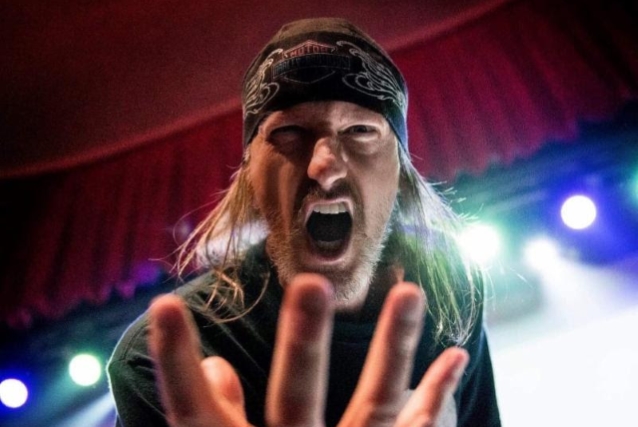 A public memorial for former RIGOR MORTIS and WARBEAST vocalist Bruce Corbitt will be held on Saturday, March 9 at the Ridglea Theater in Fort Worth, Texas.

Corbitt passed away on January 25 following an extensive and tireless battle with esophageal cancer. He was 56 years old. Corbitt was diagnosed in May 2017 and kept his family, friends, and fans up to date with the many trials and tribulations of his journey through regular open and honest Facebook Live updates. A true inspiration, Corbitt remained hopeful and determined even in the face of some of the grimmest circumstances and maintained his courage, drive, and positive nature though his final days.

Beyond playing a pivotal rule within the thrash/speed metal scene for over thirty years, Corbitt was a dedicated hearthealth advocate following the passing of RIGOR MORTIS guitarist Mike Scaccia, who died of a heart attack in 2012. Corbitt, who himself struggled with heart disease, would go on to perform RIGOR MORTIS material with the band's remaining members under the moniker WIZARDS OF GORE in tribute to Scaccia. Corbitt took home the "Best Documentary Rotscar Award" at Housecore Horror Fest 2014 for his RIGOR MORTIS documentary "Welcome To Your Funeral", which documents the band's earliest beginnings through their signing with Capitol Records in 1987 and had been working a book which will be released initially as a limited hardcore edition with all proceeds going to the support of the Corbitt family. Stay tuned for details.

Reads the public memorial page: "We will come together to celebrate and remember a great man who touched the hearts of so many people in this world. We will show our love and support for his wife Jeanna, his daughter Chyna, his stepson Lyric, and Bruce's amazing mother Glenda. We will celebrate in the most beautiful way possible by honoring Bruce's final wishes to make his memorial just the way he wanted it. Additional details on special presentations, guest musicians, and other surprises are still being worked out. Stay tuned and You Know Damn Well!"

Corbitt played what he thought would be his final show with WARBEAST — a special set at the annual Fort Worth Weekly Music Awards ceremony where the band was inducted into the 2018 Fort Worth Music Hall Of Fame — last July, at the time noting, "I'm really excited and thankful to the Fort Worth Weekly for showing us this much appreciation. I'm proud that I'm even feeling good enough right now to be able to attempt it. But I do know my limitations and I will be careful. All I know is I get to experience that feeling of being on stage again... and that's why I keep on fighting. Because good things do finally happen if you can just hang in there long enough. You know damn well!"

The performance was outstanding and Corbitt continued showing signs of improvement. So much so, the band had planned to release a special WARBEAST EP celebrating his strength and determination. WARBEAST would play another show in October as headliners of "Vulgarfest 3" at the Ridglea Theater where Corbitt again patrolled the stage against all odds. Some weeks later however, doctors found the cancer had spread again and Corbitt's health went on a steady decline.

In Corbitt's honor, WARBEAST will release a box set which will include audio of first live show under the name WARBEAST as well as video of that final WARBEAST performance. Details to be released in the weeks to come.

Scott Shelby: "Bruce and I have been friends since the late '80s and were early pioneers in the Dallas/Fort Worth metal scene and later joined forces to form WARBEAST. Bruce and I worked together as a team, or as he would say the dynamic duo. We both had a vision and our own skills to make it work and that's how we did everything that you do in a band and it worked out great for us. Unfortunately, you don't notice all the great things in a person until they die and what my friend did for Texas metal and our scene and branching out to the rest of the world is a huge loss in itself let alone all he did for others in need; doing many benefit gigs for various people... everything he and we did was done in a big style with flawless production! I could go on and on but all our peers in the business know what I'm talking about. There is a huge hole in my life, in our scene, and in the metal industry. He was a great man. I miss you, Bruce. We had so much unfinished business. Rest in Beast."

Joey "Blue" Gonzalez: "Bruce Corbitt was my bandmate one of my best friends. I wouldn't be where I am today without his help and guidance. He will always be with me on and off stage. We all will continue to share the music he created so the world will never forget. Corbitt Forever."

Drew Shoup: "I was 17 years old and it was 2012. I was still in high school at a small ski resort town in Colorado called Crested Butte. There was absolutely no metal there and when DOWN/WARBEAST came to Denver (which was five hours away) I knew I had to go. I hadn't ever seen either band; I just knew of them through following Housecore. That was the night that completely changed my life. After experiencing it, I knew that THAT was what I wanted to do. WARBEAST was so high energy and instantly became my favorite band. I was obsessed. Fast forward two years later and they had lost their guitar player. This was my chance. I moved all the way from Colorado down to DFW just to try out and join this band. It was so surreal jamming along with these dudes that I idolized (and still do). Bruce brought in a 19-year-old kid and pretty much a complete stranger to join his band. I know he had so many other choices in this town that he could've picked but he gave me a chance and had faith in me. Bruce made me feel so welcome in the Dallas scene and made me feel like a part of a family. He truly cared about people and he was a great man. He was always doing benefit shows in the scene and always involved. Watching him struggle and suffer in pain was the worst thing I've experienced yet. Nobody deserves to go through that. Especially someone like Bruce. Playing alongside him and working with him was absolutely surreal and a dream come true. He was such a great bandmate, brother, father, son, singer, friend, and person in general. I would do anything to play one more show with him. I feel for his wife Jeanna, his daughter Chyna, and his stepson Lyric. Bruce is immortal now through his music in WARBEAST and RIGOR MORTIS. He will be missed by everyone. Rest in peace, Batman."

WARBEAST released its "Enter The Arena" full-length in 2017 via Housecore Records. The record — which featured Corbitt and Shelby alongside then-new-members guitarist Drew Shoup and bassist Lyric Ferchaud — was recorded at Philip H. Anselmo's Nodferatu's Lair, mixed by Mike Thompson at the Riff Factory, and mastered by Lee Russell.