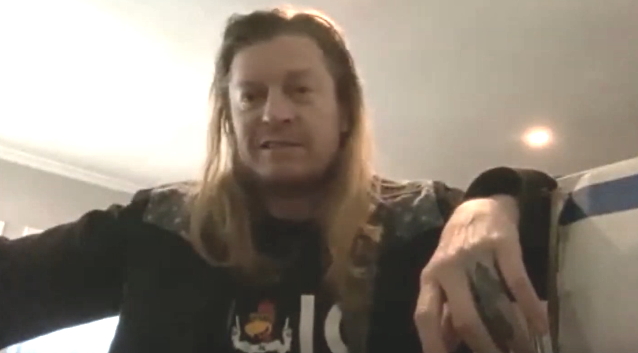 PUDDLE OF MUDD's WES SCANTLIN On How He Has Been Spending His Coronavirus Downtime: 'All I Can Really Do Is Write'

PUDDLE OF MUDD frontman Wes Scantlin spoke to Tucson, Arizona's Rock 102.1 KFMA radio station about how he has been spending his coronavirus downtime. He said (see video below): "I really didn't actually have a problem staying at home. All I can really do is write. I'm bothering the crap out of my freakin' roommates — writing and stuff. Most girlfriends that I actually date or whatever, they totally, just at one point or another, get completely sick of me continuously and constantly writing at whatever hour it is. It doesn't really matter anymore. They're tired me of hearing me freakin' write songs and stuff. It's pretty funny. Last night was hilarious. Me and my friend, we almost got into a big fight and stuff — it was ridiculous. Everything is cool now, but it was fun."

Elaborating on how he gets the inspiration to compose music, Wes said: "It comes in different segments of time. You can't really [say], 'Okay, I'm going to start writing songs at this particular time, from this time to this time. I guess I need to write at these times, so maybe I should actually check people's time sequences in my writing style.' It just kind of comes to me — it comes and goes. I get on the writer boat, and that's when it happens. But not everybody really likes the way it goes down a lot of times — especially women. It happens in those weird windows where you're just getting ready to fall asleep, and you come up with this insane cool idea, and then, all of a sudden, you're pissing everybody off in the house."

The group's first studio album in ten years, "Welcome To Galvania", was released in September 2019 via Pavement Entertainment.

Wes had almost non-stop problems with the law, alcohol, finances and other issues, before finally getting sober in 2017. After changing his life around and getting the band back in order, Wes and PUDDLE OF MUDD rebuilt a touring base, which paved the way to new music and a new album.