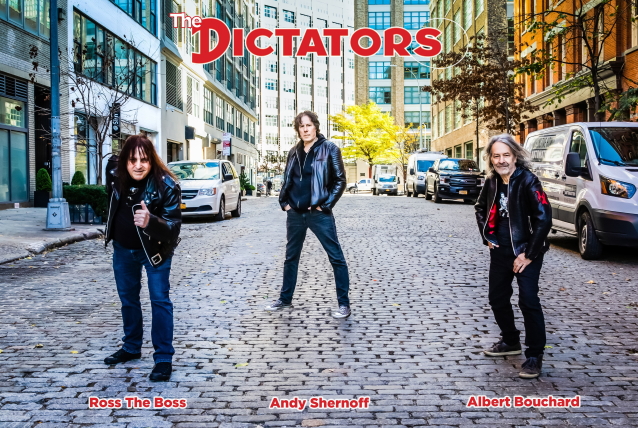 Called by critic John Dougan "one of the finest and most influential proto-punk bands to walk the earth," THE DICTATORS have released their first new music in 20 years. The group's three founding members, Andy Shernoff, Ross Friedman and Scott Kempner, are joined on drums by founding BLUE ÖYSTER CULT member Albert Bouchard, the man who played the infamous cowbell on "Don't Fear The Reaper". THE DICTATORS and the BLUE ÖYSTER CULT have known each other since the early days when they both shared the patronage of producer/manager Sandy Pearlman.

THE DICTATORS issued "God Damn New York" in January, and are now following it up with "Let's Get The Band Back Together".

"Scott and I had lost touch with Ross but we were brought together by some DICTATORS business," explained Andy. "Once it was settled, Ross suggested we play together again. It was literally the last thing on my mind, but Scott was enthusiastic, so I sat on it and eventually said okay, and damn, I am so glad I did as it's kept me busy during the pandemic."

He continued: "I wrote 'God Damn New York' with my wife before we got married for a video that never got made. When I was presenting new song ideas to everybody, this one got a thumbs up. So I changed the key, re-wrote the lyrics to give it some DICTATORS swagger, and voila, the first new DICTATORS song in 20 years. It's sort of a love/hate letter to New York City".

Known for their sarcastic lyrics and aggressive sound, THE DICTATORS released what Uncut magazine called "the first punk rock album," "The Dictators Go Girl Crazy", in 1975 — a full year before the RAMONES. Having played shows early on with THE STOOGES and NEW YORK DOLLS, they became regulars at CBGB's, while influencing bands around the world.

THE DICTATORS released two more records ("Manifest Destiny" and "Bloodbrothers") in the 1970s before breaking up. Ross went on to found heavy metal overlords MANOWAR, while Scott started roots rock pioneers THE DEL LORDS. Andy worked as a producer and songwriter while also performing with Joey Ramone and THE FLESHTONES.

An early '80s get-together produced the classic live album "Fuck 'Em If They Can't Take A Joke", and the band performed sporadically until 1995 when, realizing the extent of its fan base and influence, once again reformed full time. Numerous international tours culminated in 2001's "D.F.F.D.", the band's last studio album. After playing the final weekend of CBGB's in 2006, they once again went their separate ways.

"We have a song ready to be released in July and a special seasonal song about the holidays set up for December," the band said. "We hope to record four more tracks in June and just keep on releasing cool new tunes and videos, until things are completely open."

Find more on The dictators