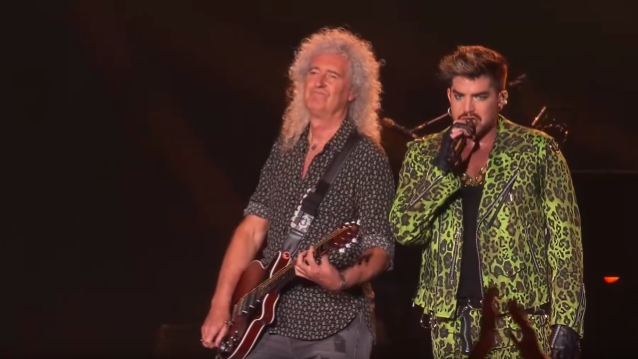 QUEEN played the original 22-minute set consisting of six songs: "Bohemian Rhapsody", "Radio Ga Ga", "Hammer To Fall", "Crazy Little Thing Called Love", "We Will Rock You" and "We Are The Champions".

As part of the performance, QUEEN included footage and audio of late singer Freddie Mercury from Live Aid for a crowd sing-along.

QUEEN's appearance at the Live Aid benefit concert at Wembley Stadium has been referred to as the "greatest live performance of all time." The July 13, 1985 concert was set up to raise funds for the famine in Ethiopia and QUEEN delivered what was arguably the performance that stole the show.

QUEEN's Live Aid performance was recreated for the band's biopic, "Bohemian Rhapsody", which was released in 2018. The film has become the highest-grossing musical biopic of all time, bringing in more than $1 billion at the worldwide box office. This was despite a lukewarm reaction from critics upon release.

Earlier this week in Australia, fire officials announced that all fires in New South Wales were contained for the first time this bushfire season. Bushfires destroyed more than 2,400 homes and burned more than 13 million acres in the country's most populous state.