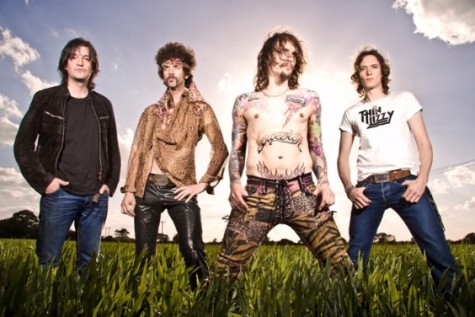 QUEEN's BRIAN MAY Performs With THE DARKNESS In London; Pro-Shot Video Available

THE DARKNESS has posted professionally filmed video footage (watch it below) of "I Believe In A Thing Called Love", which opens with May's introduction of "I just want to say, how happy are we that THE DARKNESS are back together and conquering the world again? How happy are we? How fucking happy are we?"

After the show, THE DARKNESS frontman Justin Hawkins wrote on his Facebook page, "Brian May joined us onstage for three songs. A dream came true for us tonight."

THE DARKNESS will embark on a three-week North American headlining tour in February. The trek will feature all the guitar mastery and wild pyrotechnics that THE DARKNESS shows have become well-known for. The group will perform music from 2003 album "Permission To Land", including favorites "I Believe In A Thing Called Love" and "Get Your Hands Off My Woman"; 2005's "One-Way Ticket To Hell And Back" with "One Way Ticket" and "Is It Just Me?"; as well as several new songs off their forthcoming yet-to-be-titled third album. This marks the band's first return to the States since their 2004 tour supporting "Permission To Land". THE DARKNESS will hit North America starting February 1 in Toronto and wrapping February 21 in San Francisco.

THE DARKNESS made its U.K. live comeback on June 5 in front of just 200 people at the Norwich Waterfront.

THE DARKNESS' appearance at the Download festival at Donington Park in Leicestershire, United Kingdom in June marked the band's first festival appearance since splitting up in 2006.

THE DARKNESS' first album, "Permission To Land", was released in 2003, hitting the No. 1 spot in the U.K. chart and winning "MasterCard British Album" at the 2004 Brit Awards (along with "Best British Group" and "British Rock Act").