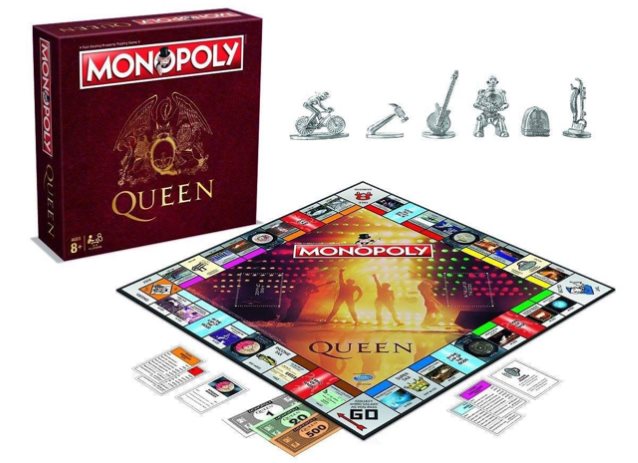 QUEEN-Themed Monopoly Board Game Coming In May

Brian May has confirmed that QUEEN will release its own version of Monopoly in May. The new board game will take fans through pivotal moments in the band's history.

"We've been very secretly developing Queen Monopoly for over a year," the guitarist wrote on his web site. "And it's due in a shop near you in May. I'm excited — it was a blast working on it — like making an album! We hope you love it!"

The official description for the QUEEN-themed Monopoly reads as follows: "Tour the amazing gig history of QUEEN, from their very first at Imperial College in 1970 to their last with Freddie Mercury at Knebworth Park in 1986. Tour the world with the band and buy gig locations and hit singles. Build staging blocks then upgrade to full productions and watch the rent come pouring in. Take your chances with A Kind of Magic and In the Lap of the Gods cards as you tour the board as one of the iconic QUEEN bespoke tokens. You can own it all!"

* Choose your favorite bespoke token, tour your favorite gigs and records and accumulate fortunes, but watch out for taxes, jail and bankruptcy
* Advance to Wembley, Hyde Park, The Forum Los Angeles — will you owe rent or reap the rewards?
* Build staging blocks and full productions and trade your way to success
The Fast-Dealing Property Trading Game is fun for the whole family

QUEEN and "American Idol" finalist Adam Lambert will embark on a summer North American tour that will launch June 23 at Phoenix's Gila River Arena and wrap on August 5 at Houston's Toyota Center.