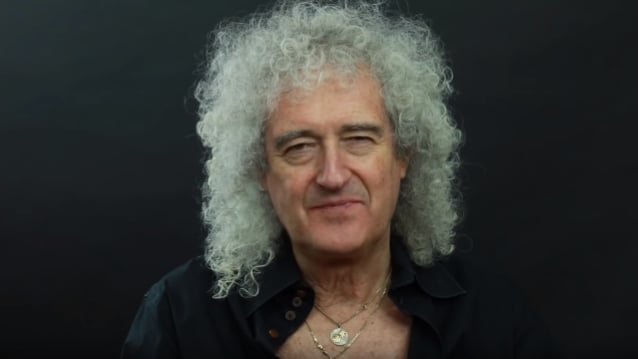 QUEEN's BRIAN MAY On 'Bohemian Rhapsody' Movie: 'We Still Haven't Earned A Penny From It'

QUEEN guitarist Brian May recently spoke with Zoe Ball of BBC Radio 2's "The Zoe Ball Breakfast Show". The full conversation can be streamed below. A few excerpts follow (as transcribed by BLABBERMOUTH.NET).

On why it took 20 years for him to release a new solo single, "New Horizons", earlier this year:

On the involvement of late physicist Stephen Hawking:

Brian: "I was able to put a little clip [of him]. He was such an inspiration and became a great friend to us all who were in this kind of community. [He's] sadly missed, but on there, which is nice, because he actually gave his endorsement to that project. That's what you're hearing — he's saying, 'We will discover things about the way we were born [and] why the human race is here. That's what this mission is about.' That's what my song was about."

On releasing the single via NASA:

Brian: "New Horizons is the mission that went to Pluto. When we were kids, Pluto was just a white dot, and nobody had any idea what it was like. This mission went all the way there — three billion miles — and photographed it at close quarters. I was in the control room, because I'd got to know these guys. It's a long story, but I know a lot of these NASA teams, and I communicate with them on various levels... Occasionally, I make music for them. The New Horizons mission photographed Pluto, and then it sped past at many thousands of miles per hour, and eventually rendezvoused with a Kuiper belt object four billion miles away. I was able to be there on New Year's Day this year when that happened. You feel like you're in the capsule — you feel like you're in the rocket, being there and seeing what they're seeing. What they saw was extraordinary. No one's ever seen a Kuiper belt object close-up. These guys are so incredibly precise, and also very artistically inspired. I think astronomy and music go together very well. You have to be precise; you have to be good at math; but you also have to have some kind of inspiration to ask the right questions and to put the right things in place... I guess it's a dream for me, because when I was a kid, I kind of wanted to be an astronaut, and I went in the other direction. My other dream was to be a musician, and I figured that I was no good at astronomy, but I was kind of okay as a musician. That's what happened... 30 years later, I got my Ph.D., and in a way, that opens the door to going back into astronomy. I love these guys — they're all full of life and interesting ideas."

Brian: "It's a labor of love, and I do love this stuff. To make this book, we went back into the Apollo mission archives in NASA, and we were able to find a few images which had never been seen before in 3-D. It takes a little bit of work, because you need two different viewpoints, and then normally, there's a bit of distortion and stuff, and you have to work on them [and] polish them up. But the reward is, when you look through your viewer, you see these things in 3-D, which is so much more evocative than seeing them flat."

On the success of the award-winning QUEEN biopic "Bohemian Rhapsody":

Brian: "It was a long labor of love — about 12 years in development, I guess. We thought it would do well in the end and we felt good about it, but we didn't realize it would do that well. It's incredible around the world — it's, like, a billion-dollar movie. I had to laugh the other day, because there's a thing in the paper saying that we were getting rich off this movie. If they only knew. We had an accountant in the other day, and we still haven't earned a penny from it. How successful does a movie have to be before you make money? There's so many people that people don't realize will take pieces off the top, but the feeling of it is so great — the fact that it's out there, and I think Freddie [Mercury] comes out it with his dignity, but without having been whitewashed in any way. It's very real... I think people are astounded how close to Freddie [Oscar-winning actor] Rami [Malek] got. It's phenomenal the way he got inside Freddie's body somehow — inside his skin."

QUEEN will tour North America again this summer with former "American Idol" contestant Adam Lambert on vocals. The trek kicks off on July 10 in Vancouver, British Columbia, wraps up August 23 in Charlotte, North Carolina and includes two shows at both Madison Square Garden in New York City and The Forum in suburban Los Angeles.