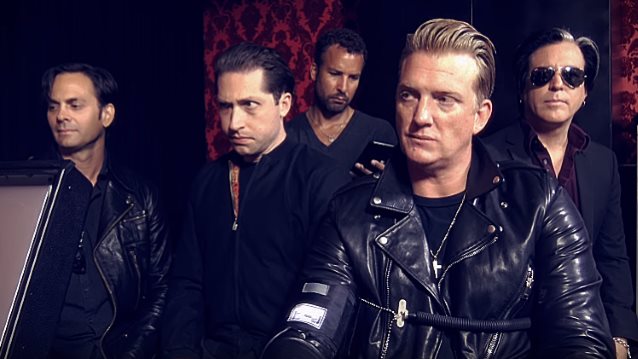 QUEENS OF THE STONE AGE's new album, "Villains", will be released this summer. The title of the band's first record since 2013's "Like Clockwork" was revealed in an album trailer directed by Liam Lynch. The clip features QUEENS OF THE STONE AGE leader Josh Homme and his bandmates taking a polygraph test where they deny the LP's title; the machine, of course, detects their lies. Also revealed in the trailer is that "Villains" was helmed by Grammy-winning producer, DJ and artist Mark Ronson, who has previously worked with Amy Winehouse, Paul McCartney, Lady Gaga, DURAN DURAN and Adele, among others. Fans can also hear a snippet of the album's first single, "Feet Don't Fail Me", which is expected to make its online debut in the coming days.

Homme recently compared "Villains" to "a panther in the trees leaping out of the darkness" and described it as "uptempo." The frontman also recently revealed that the new record wouldn't feature any special guests.

QUEENS OF THE STONE AGE has been confirmed for Chicago's Riot Fest in September. They will also play at Montebello Rockfest in Canada (June 22-25) and San Francisco's Outside Lands festival in August.